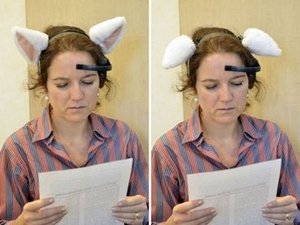 A team of Japanese inventors have come with a new device that blends the country's fascination with cuteness and its penchant for experimental high-tech -- brainwave-controlled cat ears.

The fluffy headwear reads users' brain activity, meaning the ears perk up when they concentrate and then flop down again to lay flat against the head when users enter a relaxed state of mind, say its developers.

The gizmo is called "Necomimi" -- a play on the Japanese words for cat and ear, but the first two syllables are also short for "neuro communication", says Neurowear, the inventor team whose brainchild it is.

"We were exploring new ways of communicating and we thought it would be interesting to use brainwaves," said Neurowear's Kana Nakano.

"Because the sensors must be attached to the head, we tried to come up with something cute and catchy."

A promotional video shows a young woman's cat ears perk up as she bites into a doughnut and again when she passes a young man in a park, only to flatten as she apparently brushes off the missed encounter, relaxes and smiles.

The prototype model has been developed in black and white versions with a sensor produced by a Silicon Valley-based partner company.

Neurowear hopes to market the device by the end of the year in Japan and elsewhere. It has not yet set a price.

The team behind the invention includes a robotics expert, a technology consultant and an advertising agency, who between them have spent five months so far developing the Necomimi.

Brainwave sensors, which detect electrical currents flowing through the brain, have been used in medical devices but also robotics and toys.

"Brainwave sensors used for medical equipment cost several million yen (tens of thousands of dollars) and can only be used by hospitals and other specialized agencies," the group's Tomonori Kagaya told AFP.

"But falling costs have allowed people like us to seek interesting ways to use the sensors," he said.

"Existing toys featuring brainwaves focus on controlling brainwaves. Meanwhile, Necomimi can reveal a user's state of mind. In that sense, we are proposing a new communication tool."

The Necomimi video can be seen at http://neurowear.net/