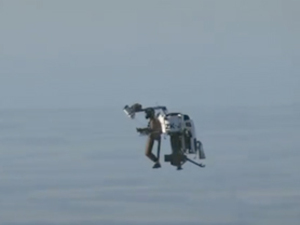 Whizzing around with your own personal jetpack may sound like the stuff of science fiction, but New Zealand inventor Glenn Martin aims to have his "jet ski for the skies" on the market within 18 months.

After 30 years of painstaking development, Martin's jetpack last month soared 1,500 meters (5,000 feet) above the South Island's Canterbury Plains as its creator watched anxiously from a helicopter hovering nearby.

The May 21 flight, featuring a remote-controlled jetpack carrying a dummy pilot, was a milestone in Martin's dream of building the world's first practical jetpack.

"The first people using these in cities will be medical personnel doing emergency response," he said.

"Then you'll see people putting camera mounts on them for traffic reporting and it will eventually evolve into people just flying for fun or going to work."

Inspired by childhood television shows such as "Thunderbirds" and "Lost in Space", Martin set out in the early 1980s to create a jetpack suitable for everyday use by ordinary people with no specialist pilot training.

"I've wanted one from the age of five and was disappointed they weren't available and thought 'if it's not around, you've got to make it'," he told Agence France Presse at his factory in Christchurch industrial estate.

He said large commercial customers should be flying the jetpack, which is still undergoing final testing, by the end of the year and he hoped to make it publicly available in 2012 at a cost of about $U.S.100,000.

Time magazine named Martin's creation as one of the world's most anticipated inventions late last year but he is acutely aware that the quest for a working jetpack has been littered with failure.

Probably the best known is the Bell Rocket Belt, which featured in the James Bond movie "Thunder ball", but could only fly for 30 seconds and is now gathering dust at the Smithsonian Institution in the United States.

Swiss pilot Yves Rossey has also developed a jet-powered wing that straps to his back, although using it involves leaping from a flying plane.

Martin's jetpack -- which Time likened to two enormous leaf blowers welded together -- is much larger than its predecessors, consisting of a pair of cylinders containing propulsion fans attached to a free-standing carbon-fiber frame.

The pilot backs into the frame, straps himself in and controls the wingless jetpack with two joysticks

Powered by a two-liter V4 engine generating about 200 horsepower, the concept as explained by Martin is simple: "If you shoot enough air down fast enough, then you'll go up."

Fine-tuning details to turn the idea into a safe, workable flying machine has taken decades.

After numerous prototypes, the model that Martin hopes to put into production is designed to meet US ultra light standards, weighing less than 115 kilograms (254 pounds) and carrying a 20 liter (4.5 gallon) fuel tank.

That theoretically gives it a 30 minute flight time and a range of 50 kilometers (31 miles), although he said work was already underway on versions with extended capabilities.

Martin says flying the machine can be mastered in less than an hour. It has a rocket-propelled parachute if anything goes wrong.

Importantly, Martin said it runs off ordinary petrol "so you can fly into your local gas station, fill her up, grab a pie and a Coke and then fly off".

That vision may take some time to come to fruition, as current US laws bar ultra lights from flying over built up areas, but Martin said it would eventually become reality.

He said he had been stunned by the international reaction since the jetpack made a public debut with a brief flight at a U.S. air show in 2008.

What began as a dream of creating a fun invention for adrenaline junkies -- the jet ski of the skies -- has transformed into a project he believes could match the helicopter in revolutionizing aviation.

"We've been approached by I think five different militaries (and) about six different governments," he said, declining to name potential clients for confidentiality reasons.

"People are looking at using this in border patrol around a lot of the sensitive borders in the world.

"We've got one large search and rescue organization that wants 500 for after earthquakes and tsunamis and those sorts of things, where the roads are beaten up and you're struggling to get helicopters down."

After 30 years during which he mortgaged his house and became weary of being seen as "the crazy guy in the workshop", Martin now employs a core of eight staff in his factory and is confident of commercial success.

"All of the great innovations in aviation have been done by a small team of people, starting back with the Wright brothers, who did it in their bicycle shop in Dayton Ohio."