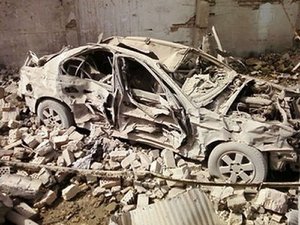 Al-Qaida's front group in Iraq claimed responsibility on Wednesday for a string of recent suicide bombings that killed at least 36 people, including a military intelligence chief.

A car bomb driven by a suicide attacker on Monday killed Colonel Nuri al-Mashhadani and 11 other people, many of them soldiers, Iraqi military sources said.

It came three days after 24 people were killed in a suicide attack outside a mosque in Tikrit, and later at a hospital where victims were being treated.

"One of the suicide bombers managed to enter the main compound where tens of security officers had gathered in one place," said a statement posted on jihadist website, Hanein, referring to the first attack on Friday.

It said a fellow suicide attacker "was waiting" for the wounded to arrive at the hospital, where he detonated his payload.

On Monday, another suicide bomber in a car killed Mashhadani when the officer's vehicle stopped at a checkpoint, the statement said.

Tikrit is the capital of mainly Sunni Arab Salaheddin province, which was a key battleground in the insurgency that followed the U.S.-led invasion of 2003.

Iraqi leaders are still considering whether to request an extension of the U.S. military presence beyond a scheduled withdrawal at the end of this year, and top American officials have pressed their Iraqi counterparts to decide soon.

Violence has fallen sharply across Iraq since its peak in 2006 and 2007, although attacks remain common. A total of 177 Iraqis were killed as a result of violence in May, according to official figures.