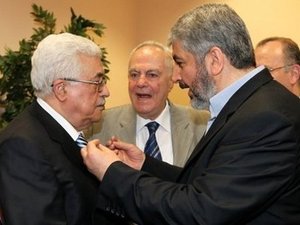 Representatives of Palestinian rivals Fatah and Hamas will meet in Cairo on June 14 for new talks on the formation of an interim government, a Hamas official said Wednesday.

In a statement issued by Hamas, Ezzat al-Rasheq said the meeting would follow up on several issues under the terms of a reconciliation deal signed by the two groups last month.

"The next meeting between Hamas and Fatah will be next Tuesday, June 14," Rasheq said. "The meeting ... will focus on the make-up of the Palestinian government, the issue of political prisoners and the implementation of the reconciliation agreement on the ground."

The unity deal signed by the two parties, longtime bitter rivals, calls for the formation of a transitional government of independents to lay the groundwork for legislative and presidential elections in a year's time.

Senior Fatah official Nabil Shaath last month said he expected the final make-up of the government to be agreed by June 6, but no announcements on the line-up have yet been made.

The two sides are reportedly still in negotiations over who will take the prime minister position, with Fatah head and Palestinian President Mahmoud Abbas favoring his current prime minister Salam Fayyad, despite Hamas objections.

The reconciliation deal also calls on the two sides to deal with other thorny issues, including the release of political prisoners taken by both sides and the eventual integration of their respective security forces.

The unity deal is intended to end years of rivalry between the two groups, which boiled over in 2007, a year after Hamas won a surprise victory in legislative elections.

Fighters from the two groups fought street battles in Gaza, which saw Hamas rout Fatah, seizing control of the coastal strip and leaving Abbas' party to run a parallel government unable to extend control beyond the West Bank.