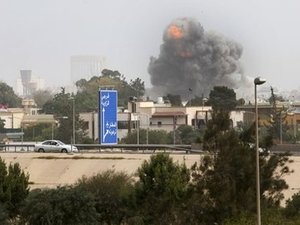 NATO pledged on Wednesday no let-up of its relentless air war in Libya after Moammar Gadhafi vowed he would never surrender, even as bombs rained down on his Tripoli residence.

Spain, meanwhile, joined the growing list of countries which recognize the rebels seeking to topple Gadhafi as the sole representative of Libya's people, leaving the strongman more isolated than ever.

NATO allies meeting in Brussels pledged to stay in Libya "for as long as necessary" and commit the "necessary means" to the military campaign against Gadhafi's forces.

Alliance defense ministers said they were "determined to continue our operation to protect the Libyan people for as long as necessary," in a statement issued after a working lunch.

"We are committed to providing the necessary means and maximum operational flexibility within our mandate to sustain these efforts and welcome additional contributions to our common efforts," the statement added, after NATO urged its 28 member states to step up and share out the load.

The defense ministers also demanded the strongman to step down.

"Time is working against Gadhafi, who has clearly lost all legitimacy and therefore needs to step down," the statement said.

The NATO meeting came hours after Gadhafi in an audio message broadcast late Tuesday said that he was close to the NATO bombing but was still resisting and called on his people to resist too.

"Despite the bombings, we will never submit," Gadhafi said in the nine-minute message, which was broadcast on his 69th birthday Tuesday. "I am near the bombing but I am still resisting.

"We have only one choice -- (to stay in) our country to the end. Death, life, victory, no matter what. We will not leave our country or sell it, we will not submit," he said in his first intervention since he appeared on state television on May 19.

Shortly after the recording was broadcast, more air strikes hit the Libyan capital, continuing a bombardment that had gone on throughout Tuesday.

Early Wednesday, another wave of blasts was heard near Gadhafi's residential complex Bab al-Aziziya, which has been the main target of the international military intervention launched on March 19.

"Spain will help the Libyan people; we want a democratic country with rights and freedoms," Jimenez said, after holding talks with Mustafa Abdul Jalil, head of the NTC, the political arm of the rebels who control eastern Libya.

The minister, who arrived in the Benghazi earlier Wednesday, stressed to the media that her government was the "first to declare that a solution in Libya lies with the departure of Gadhafi.”

Other countries which have recognized the NTC as the sole and legitimate representative of the Libyan people include France, Italy, Britain, Jordan, Qatar, Malta and Gambia.

Adding to Gadhafi's growing isolation was an African Union call this week for him to step down, the first crack in the continent's public stance towards the Libyan strongman who has long championed its various causes.

The leader of the AU's heads of state mediation team on Libya, Mauritania's President Mohamed Ould Abdul Aziz, said Gadhafi's departure had become necessary as "he can longer lead Libya".

It was the first time a head of state on the AU panel, which has made several trips to Libya to try to negotiate a settlement to the conflict, has made such a direct public reference to the departure of the Libyan leader.

And Gadhafi's Labor Minister, Al-Amin Manfour, became the latest member of his regime to defect, announcing at a meeting of the International Labor Organization in Geneva that he was changing sides.

On Tuesday, Khatib was in the embattled Libyan capital where he held "positive talks" with officials of Gadhafi's government, a spokesman for the regime said.

Among envoys also beating a path to Benghazi was Russian envoy Mikhail Margelov, who was in the rebel capital on Tuesday.

Margelov, President Dmitry Medvedev's African envoy, said after holding talks with the rebel leadership that Russia was prepared to provide financial support to the rebels but opposed any escalation of the conflict.

The rebels said they were ready to receive Russian aid "tomorrow," but stressed that they would not enter any negotiations until Gadhafi stepped down.

Margelov said Moscow was prepared to "facilitate dialogue between the two camps," but Foreign Minister Sergei Lavrov stressed Russia did not want to be the lead mediator.

On Wednesday, Margelov told Moscow Echo radio in an interview that he was prepared to meet Gadhafi.

"I have met with Moammar Gadhafi in the past and am ready to do so now, if he receives me," he said.

Air war never accomplished anything. The proof being the Lebanon 2006 war.