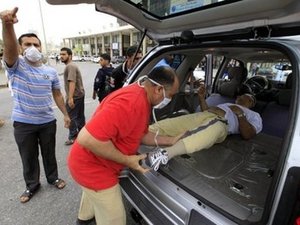 Bahrain's main Shiite opposition group said on Wednesday that it had been banned from going ahead with a planned presentation detailing abuses committed during a government crackdown on Shiite-led protests earlier this year.

"Authorities have banned a presentation on 'the atrocities of human rights violations since February 14'," the Islamic National Accord Association (Al-Wefaq) said.

Hadi al-Moussawi, one of 18 Al-Wefaq MPs who resigned from parliament in protest at the March crackdown, told Agence France Presse that a security official had called the movement warning that the event was "illegal because authorities were not informed."

Moussawi said the warning was strange as the group had never had to inform authorities of seminars held inside its premises in the past.

The ban on the event came just a week after Bahrain announced the lifting of a state of emergency it imposed in mid-March when it crushed the month-long protests with the help of military intervention by its Gulf neighbors.

Do we hear anything from the human rights champions in Europe about this?