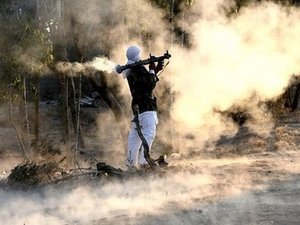 Moammar Gadhafi's forces attacked Libya's third-largest city Misrata on Wednesday drawing no response from NATO despite a pledge by the alliance to press its air war, a rebel spokesman said.

Between 2,000 and 3,000 Gadhafi troops attacked the Mediterranean port city from the south, west and east, killing 10 rebel fighters and wounding 26, the spokesman Hassan al-Galai, told Agence France Presse by telephone from the city.

Despite the deployment of tanks, Grad rocket launchers and heavy artillery, there had been no intervention by NATO led aircraft by 6:00 pm (1600 GMT) when the fighting was still raging, Galai said.

Misrata is the rebels' most significant enclave in western Libya.

On May 12, the rebels scored a major victory when they secured the airport, effectively ending a two-month siege of the city by pushing Gadhafi's forces beyond rocket range.