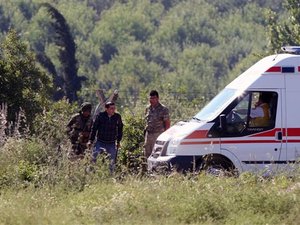 About 1,000 more Syrians have fled to Turkey, bringing to some 1,600 the number of people taking refuge in the country amid unrest in their homeland, a government official said on Thursday.

"According to information from local authorities, about 1,000 more people have arrived and the total is now around 1,600," the official, who declined to be named, told Agence France Presse.

The influx of Syrians has sharply increased since Tuesday, with the refugees crossing the border in the Mediterranean province of Hatay.

Among them were several dozen people wounded in security crackdowns, who were hospitalized.

The number of arrivals in the previous 24 hours stood at 1,050 as of Thursday morning and is expected to rise further following Prime Minister Recep Tayyip Erdogan's statement that Turkey would keep its door open to Syrians fleeing oppression, Anatolia news agency reported.

"At this point, it is out of question for us to close the doors," Erdogan said on Wednesday.

Most of the refugees came from the northwestern Syrian town of Jisr al-Shughur, fearing a backlash after officials said 120 policemen had been killed there, according to Anatolia.

They have been sheltered in a tent city in the town of Yayladagi, which the Turkish Red Crescent set up after the first group arrived in late April.

The Red Crescent is planning to erect a second camp, according to Anatolia.