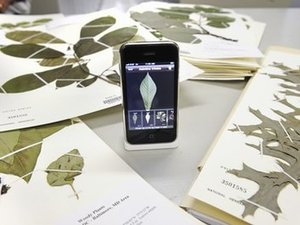 If you've ever wondered what type of tree was nearby but didn't have a guide book, a new smartphone app allows users with no formal training to satisfy their curiosity and contribute to science at the same time.

Scientists have developed the first mobile app to identify plants by simply photographing a leaf. The free iPhone and iPad app, called Leafsnap, instantly searches a growing library of leaf images amassed by the Smithsonian Institution. In seconds, it returns a likely species name, high-resolution photographs and information on the tree's flowers, fruit, seeds and bark.

Users make the final identification and share their findings with the app's growing database to help map the population of trees one mobile phone at a time.

Leafsnap debuted in May, covering all the trees in New York's Central Park and Washington's Rock Creek Park. It has been downloaded more than 150,000 times in the first month, and its creators expect it to continue to grow as it expands to Android phones.

Smithsonian research botanist John Kress, who created the app with engineers from Columbia University and the University of Maryland, said it was originally conceived in 2003 as a high-tech aid for scientists to discover new species in unknown habitats. The project evolved, though, with the emergence of smartphones to become a new way for citizens to contribute to research.

It's also the first real chance for citizens to directly access some of the science based on the nearly 5 million specimens kept by the U.S. National Herbarium at the Smithsonian's National Museum of Natural History. The collection began in 1848 and is among the world's 10 largest plant collections.

Kress said it will allow users to easily learn about the plant diversity in their yards and parks. It also includes games and could be used to build lessons or scavenger hunts for schools.

Christopher Casal, a technology teacher in Brooklyn, said he recently stumbled across the app and shared it with elementary science teachers who plan to test it this summer to try to integrate Leafsnap into their lessons next fall.

"You could be studying a certain kind of plant that you don't have accessible in the school yard," he said. "It just sort of gives it that hands-on experience without actually having the flower in your hand."

Casal said he was impressed with the design and the universities behind it that give the tool "a little bit more credibility, a little more hope that it will remain a free app."

For Colleen Greene, an avid hiker and a librarian at California State University, Fullerton, the app immediately caught her eye for its potential to engage citizen scientists and especially students. She has already downloaded the app and started trying to use it, even though it won't cover all West Coast trees for some time.

"If we lug our wildflower and track finder books out with us, something like this is much more engaging and much more portable," she said. "For young people, for young adults, students, I could see them just eating this up."

There's just one catch for her — a demonstration video shows a girl plucking a leaf off a tree to take a snapshot with the app. That's a violation of "leave no trace" principals for outdoor stewardship and illegal in many parks, including national parks, Greene said.

"You know, one or two leaves may be not such a big deal, but if it's a popular, highly used app, I would think it could eventually cause some issues," she said.

At the Smithsonian, Kress said the app is an important tool because learning about the environment is the first step in conserving it.

"We are of course concerned about the impact we have on nature, but as educators and scientists, we think the value of helping people learn more about the environment outweighs the small impact of plucking a few leaves," he said.

It can be used without plucking leaves off of trees, as well. To identify a tree, it works best if users place a leaf on a white background to photograph.

Engineers used facial recognition technology to devise an algorithm that could identify a leaf by its shape and features. The image is uploaded to a server, and within seconds it returns a ranking of the most likely tree species a user has found, along with other characteristics to help confirm the tree's identity.

To create a reliable database as the app's backbone, the team started by photographing leaves from the Smithsonian's vast collection of specimens. It became clear, though, that they would need images of living specimens for the application to work correctly. A nonprofit group called Finding Species was called in to capture thousands of images of leaves for the app.

Beyond finding answers about the world of trees, even casual users can contribute to scientific research. Images and tree identifications are automatically sent to Leafsnap's database with mapping information from the phone. Scientists said that data could be used to map and monitor the growth and decline of tree populations.

The iPad version also includes a feature called "Nearby Species" to show all the trees that have been labeled by others near a user's location.

Such a reinvented field guide, as simple as a Google search, wouldn't have been possible just a few years ago before the emergence of smartphones, said computer science Professor Peter Belhumeur, who directs Columbia University's Laboratory for the Study of Visual Appearance and helped create the app.

"People often think of technology as alienating us from other people or the outside world," Belhumeur said. "I hope that this technology helps connect us with our natural environment."

Other apps have been developed to identify songs from short clips recorded on a smartphone or to find restaurants. More science apps could be on the way as well.

Belhumeur said his son, William, already is thinking of apps they could create to identify fish or bugs. Smithsonian scientists are exploring such possibilities with butterflies and other critters, Kress said.

Scientists also are getting requests to expand the app's capabilities to cover trees in France, Morocco, Thailand and elsewhere.

"We want to spread this, not across the United States, but across the world," Belhumeur said.

It's just a matter of collecting and photographing all the tree species native to a region.

Leafsnap cost about $2.5 million to develop, funded primarily by a grant from the National Science Foundation. It will cost another $1 million to expand it within the next 18 months to cover all the trees of the United States, involving about 800 species.