Yemeni President Out of Intensive Care 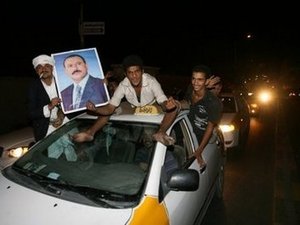 Yemeni President Ali Abdullah Saleh is out of intensive care in neighboring Saudi Arabia where he is being treated for bomb blast wounds, state media said, prompting celebratory gunfire by his supporters that left dozens wounded.

Fireworks rang out over the Yemeni capital during Wednesday night as Saleh loyalists took to the streets of Sanaa "feting the success of the surgery... and his transfer from intensive care to a royal suite" in a military hospital in Riyadh, the official Saba news agency said.

The celebratory gunfire wounded some 80 people in the capital alone, medical sources said. Witnesses said there were also casualties in provincial towns.

There have been conflicting reports about the veteran leader's health since he was flown to Riyadh on Saturday for treatment for wounds sustained in a bomb attack on his presidential compound the previous day. He has not been seen in public since.

A Saudi official said on Wednesday that Saleh's health was "stable", adding the beleaguered president was waiting for doctors to "appoint a date for cosmetic surgery."

Saleh, 69, would undergo an operation to treat "light burns on the scalp," he said, adding that "reports on the deterioration of his health condition are baseless".

Vice President Abdrabuh Mansur Hadi has insisted that Saleh is in good condition and that he will return to Yemen within days.

The Saudi daily al-Watan quoted the head of Yemeni community in the kingdom as saying that he had visited Saleh in hospital and that he was in good health.

"He was well... I visited him in the evening and he spoke to us. He asked about (Yemeni) expatriates," Taha al-Humayri was quoted as saying.

But as Saleh recovers in Riyadh, his opponents, who have been protesting for his departure since late January, are pushing for the vice president to establish an interim ruling council to prevent him from returning to power.

"We will continue to press for the formation of an interim presidential council," Wassim al-Qurshi, a leading protest activist told Agence France Presse on Thursday.

In a statement issued after a demonstration outside Hadi's residence in Sanaa on Tuesday, Saleh's opponents demanded "an immediate declaration of a one-year transition period... and the formation of an interim presidential council."

The protesters also demanded that "former regime" figures be banned from joining the council and that its members be barred from standing in future presidential elections.

Saleh has come under mounting international pressure to quit as five months of protests have drawn in the country's powerful tribes, sparking deadly fighting with loyalist security forces on the streets of Sanaa.

The United States has warned that the turmoil in Osama bin Laden's ancestral homeland is playing into the hands of al-Qaida.

The New York Times reported that Washington has stepped up air strikes on suspected militant targets in Yemen using both drones and manned fighter jets.

The paper said that the strikes over the past few weeks came nearly a year after Washington halted operations in Yemen because bad intelligence had led to civilian deaths.

Saleh's government has been a key partner in the U.S. “war on terror” but it has always denied U.S. strikes on its soil insisting that its own forces carried out the operations.

Government officials say most of the town is in the hands of the jihadists but the opposition accuses Saleh of exaggerating the al-Qaida threat in a desperate bid to ease foreign pressure on his 33-year rule.