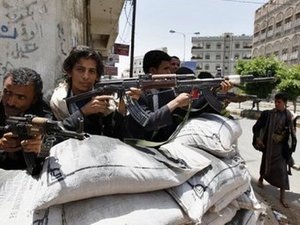 Three Yemeni soldiers and 10 suspected al-Qaida gunmen were killed in clashes on the outskirts of the militant-held southern city of Zinjibar, a military officer said on Thursday.

"Three soldiers were killed and four others wounded, while information from the other side says that at least 10 al-Qaida gunmen were killed," he said.

Inside the city, only the base of the 25th Mechanized Brigade remains in government hands.

The officer said that troops were making advances on the ground and that the city was under siege. He added that government forces could storm into Zinjibar within hours.

Scores of soldiers have been killed in clashes in and around Zinjibar.

Health officials in the city, which has no power or water supply, warned of the risk of disease from bodies lying in the streets.

"The situation in the city is catastrophic. There are decomposing bodies in the streets," said al-Khodr al-Saadi, the health chief in Abyan province.

The head of al-Razi hospital in nearby Jaar, Khaled al-Jaradi, said the medical centre was receiving around 30 cases of diarrhea each day due to contamination of water and food across the province.

Yemen is the home of al-Qaida in the Arabian Peninsula, an affiliate of the slain Osama bin Laden's militant network.