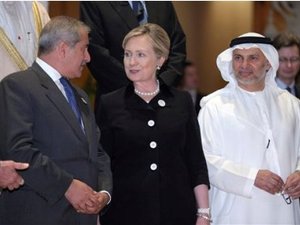 Major powers met Thursday to map out what Washington calls an inevitable "post-Gadhafi Libya" as hundreds of millions of dollars poured into an international fund to aid rebels.

U.S. Secretary of State Hillary Clinton and counterparts from NATO and other countries participating in air strikes against Moammar Gadhafi's administration held their third round of Libya talks in the United Arab Emirates capital Abu Dhabi.

"Gadhafi's days are numbered. We are working with our international partners through the U.N. to plan for the inevitable: a post-Gadhafi Libya," Clinton told participants, according to her prepared remarks distributed by aides.

"Time is on our side," the chief U.S. diplomat said, adding the international military, economic and political pressure was mounting on the Libyan colonel who has been in power for four decades.

"In the days ahead," she said, "we have to coordinate the many plans taking shape and work closely" with the rebel National Transitional Council (NTC) and the Libyan people.

"Each of these efforts helps us to protect the Libyan people and lay the groundwork for a unified, democratic, and peaceful future," she said.

But Clinton offered no direct U.S. financial contribution to the rebels, pledging instead another "$26.5 million to help all the victims of this conflict, including Libyan refugees."

Such money will likely be distributed through relief agencies.

U.S. officials said the United States would urge Arab countries to offer more funds to the rebel administration based in Libya's second city of Benghazi.

His French counterpart, Alain Juppe, said his government would release 290 million euros ($420.9 million) of frozen Libyan funds for the benefit of the NTC.

A member of the NTC said on the sidelines of the Abu Dhabi meeting that an international fund aimed at helping Libya's rebels had "become operational" from Thursday.

The opposition has complained that it has seen nothing concrete since the contact group last met on May 5 in Rome when the powers agreed to set up a fund to aid the rebels and promised to tap frozen Gadhafi assets.

Two dozen countries, including key NATO allies Britain, France and Italy, as well as delegates from the United Nations, the Arab League, the African Union and the Organization of Islamic Conference attended the talks.

A U.S. official told reporters on condition of anonymity on Wednesday that Washington cannot say whether the NTC "is ready to assume complete control" even if Gadhafi's fall is only a matter of time.

He also cautioned that there was no international consensus over when Gadhafi should leave power, where he should go, or even whether he should leave Libya.

The talks among the powers came amid continuing explosions in the Libyan capital. Four blasts shook Tripoli on Thursday afternoon, Agence France Presse reported. During Wednesday night into Thursday other explosions echoed through the city from near Gadhafi's compound, according to AFP.

The Mediterranean coastal city is the most significant rebel-held enclave in western Libya and a rebel spokesman said up to 3,000 Gadhafi troops attacked it in a three-pronged movement from the south, west and east on Wednesday.

Twelve people were killed and 33 wounded in the fighting in which Gadhafi's forces deployed gunships, tanks and Grad rocket launchers as well as mortars, the spokesman, Hassan al-Galai, told AFP by telephone from the city.