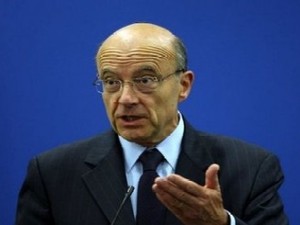 French Foreign Minister Alain Juppe on Thursday accused the Syrian government of "massacring" its civilians who are seeking “more freedom and democracy.”

"The attitude of Syria is unacceptable," he said.

"One cannot continue massacring the civilian population under the pretext that this population aspires to have more freedom and democracy," Juppe told Agence France Presse on the sideline of an international meeting on Libya in Abu Dhabi.

He said he hoped that a proposed resolution condemning repression in Syria will be "voted on at the U.N. Security Council in the coming days."

Damascus is Moscow's closest ally in the Middle East. Russia has a naval base at Tartus in Syria.

Syria's foreign ministry, meanwhile, said Damascus was "determined to pursue reforms under the leadership of President Bashar al-Assad. It will authorize no external interference on this subject."

Human rights groups says more than 1,100 people have been killed throughout Syria since the protests erupted in mid-March.