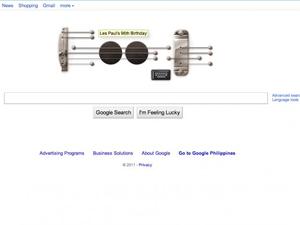 Google paid tribute to U.S. guitar legend Les Paul on Thursday by transforming the celebrated logo on its homepage into a guitar which plays when strummed with a computer mouse.

The six strings on the guitar, which is shaped to spell out the name of the Internet search giant, each play a different note when touched with the cursor and light up in the Google colors of red, blue, green and yellow.

A composition can also be recorded and played back.

Les Paul, a virtuoso guitarist and inventor who shaped the sound of rock 'n roll, was born on June 9, 1915 and died on August 12, 2009. He helped pioneer solid-bodied electric guitars and multitask recording.

The Mountain View, California-based Google frequently changes the "doodle" on its famously spartan homepage to mark anniversaries or significant events or pay tribute to artists, scientists, statesmen and others.