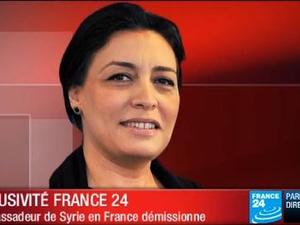 French broadcaster France 24 is taking legal action for an alleged hoax in which a woman claiming to be Syria's ambassador to Paris announced her resignation live on air, the channel said Thursday.

"France 24 has officially filed a complaint to the Paris public prosecutor regarding identity theft and impersonation," the channel said in a statement.

Ambassador Lamia Shakkour went on other channels denying the announcement after the woman surprised France 24, which had contacted her via the embassy, by making the declaration in an interview on Tuesday evening.

"France 24 has no option but to take Ms. Shakkour's denials seriously," the channel said on Thursday.

It "commissioned comparative analyses which show that the voice heard during the interview conducted on France 24 on Tuesday evening is different from the voice which later issued the denial broadcast on BFM TV," another channel.

In Tuesday's interview, the woman claiming to be the ambassador said she was quitting in protest at the "cycle of violence" in a deadly crackdown by Syrian authorities against protestors.

France 24 said it had reached the woman claiming to be Shakkour by telephone following exchanges with the embassy's press office via its usual phone numbers and email address.

The TV network said that it and the ambassador were victims and expected that Shakkour and the embassy "will give their total support to this complaint and collaborate fully in the ensuing investigations."

France 24 should have validated the caller before putting her on the air. No excuses. Clear bad intentions here.

France 24 is part of that imposture .

For all those who jump on the conspiracy theory bandwagon and think France 24 was part of the play, let me ask what's the point?
I mean if the news is a hoax, it will soon be denied, and the channel's credibility will be undermined. There's no other conclusion to the issue. So what's the point of doing it?