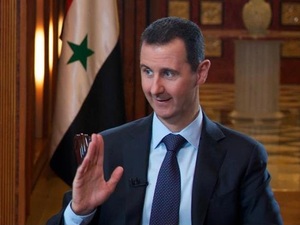 Syrian President Bashar Assad warned on Wednesday the West that it will pay a heavy price for its alleged support of al-Qaida in Syria and said his regime's defeat is not an option.

Assad, whose has been battling an uprising since March 2011, told state television al-Ikhbariya in an interview that the West is playing with fire.

"The West has paid heavily for funding al-Qaida in its early stages. Today it is doing the same in Syria, Libya and other places, and will pay a heavy price in the heart of Europe and the United States," Assad said.

"We are facing a new war, a new method" with fighters, some of whom are Arabs, not Syrians," the president said in the hour-long interview, adding that the "army is not fighting a war to liberate Syrian territory, but a war on terror."

While saying the "situation is better now than it was before," he claimed that "there are big powers, in particular the United States, that do not accept countries to be independent; they want them to be submissive."

The president did not spell out how he believed the West was supporting al-Qaida in Syria. In fact, the United States and EU countries have been loathe to fulfill rebel requests for arms for fear they might fall into the wrong hands.

But he insisted that "everyone who carries weapons and attacks civilians is a terrorist, be they al-Qaida or not."

The regime has long used the word "terrorist" to describe those who have taken up arms against it.

Assad also warned that a defeat of his government would spell the demise of Syria, and vowed that he will not surrender.

"There is no option but victory. Otherwise it will be the end of Syria, and I don't think that the Syrian people will accept such an option," he said.

"The truth is there is a war and I repeat: no to surrender, no to submission."

As for his own future, he said that would be decided by the people.

"The position (of president) has no value without popular backing. The people's decision is what matters in the question of whether the president stays or goes," he said Assad, suggesting he might stand for a new term in elections slated for next year.

Assad took to task neighboring Jordan, which says is hosting around 500,000 Syria refugees, accusing it of allowing rebels free movement across its borders.

"I cannot believe that hundreds (of rebels) are entering Syria with their weapons while Jordan is capable of arresting any single person with a light arm for going to resist in Palestine," Assad said.

"We would wish that our Jordanian neighbors realize that... the fire will not stop at our borders; all the world knows Jordan is just as exposed (to the crisis) as Syria."

In Amman, meanwhile, Information Minister Mohammad Momani said the United States plans to deploy 200 troops in Jordan because of the war in neighboring Syria.

"The deployment of the troops is part of U.S.-Jordanian military cooperation to boost the Jordanian armed forces in light of the deteriorating situation in Syria," Momani told Agence France Presse. He did not say when the troops were due to arrive in Jordan.

Assad has repeatedly blamed enemies and conspirators for the deadly unrest rocking Syria, where the U.N. says more than 70,000 people have been killed over the past two years.

And he told al-Ikhbariya that, "from the first day, what is happening in Syria is dictated from abroad."

The interview was timed to coincide with Syria's Independence Day, which marks the 1946 end of French rule.

Meanwhile, staunch Assad ally Russia warned that the Friends of Syria group of countries opposed to the Damascus regime was playing a "negative" role in resolving the conflict.

"Right now we see this process is making a negative contribution to the (Geneva) decisions," Russian Foreign Minister Sergei Lavrov told reporters in Istanbul, referring to a 2012 accord aimed at ending the conflict through talks between all parties.

A Friends of Syria meeting is set for Istanbul on Saturday to be attended by U.S. Secretary of State John Kerry as well as several of his Western and Arab counterparts.

he won't run because they have this sense of entitelment to them. They beleive they are royality and the rest lessor human beings (lebanese and syrians). I can't wait to see the look on their faces when they are hanged. I'm sure it will be as priceless as when qadafi was found in a sewer hole.

While saying the "situation is better now than it was before," he claimed that "there are big powers, in particular the United States, that do not accept countries to be independent; they want them to be submissive."

situation is better where? lol if he had an ounce of dignity, he would announce the death of his brother!

"I cannot believe that hundreds (of rebels) are entering Syria with their weapons while Jordan is capable of arresting any single person with a light arm for going to resist in Palestine," Assad said.

how many palestinians did he allow with a light arm to go resist in palestine through the syrian border, meaning the golan heights? lol

at least 10 hizbullah shayateen died today in syria while they were present in a military airport. bee isim el aab wal ibin!

Mr. Assad, I am sure that you were given many chances to steer away from your Iranian connection together with helping the so called self proclaimed "Hezeb Allah" in Lebanon. I am not sure if you have much to complain about and/or criticize Al-Quaida see as though Iran is amassing one of the deadliest weapons ever made by humans. Oh yeh, this is all about defeating the Zionist Israel. OK, go ahead and kill each other.

What goes around comes around. The assads have financed islamists for years and are now paying the price.

right on brother. Your name is very fitting as well ;)

Your commentators are sick or you are sick in the head for having those comments on your website. It is an insult to your civilized readers.

You are the sick one john marina. You lie and pretend to be lebanese when you are not. Someone who lies about such a thing as which people he belongs to does not deserve to call others sick. Go to hell you sick freak.

Chip off the old shoulder of your evil butchering father,scum.

I took a long Easter holiday, how is everyone?

Bashar is still digging his own grave as I can see.... Threats don't work well with the western world.

Your head will roll soon. You have been playing with fire for too only too long. A well established family tradition.He had a great part in the political assassination, along with his partners in crime the iranians and Hizbollah. He chanelled every fundamentalist to Iraq when the americans were still there. Now he's being rewarded. All the filth, and crime refinements he's introduced to the ME along with the iranians, booby trapped cars, suicide kamikaze (invented by the iranians in the Irak/Iran war and used in Beirut in the early eighties against the french and american contingents), he will have to taste!

Amen to the truth!

"Assad said that the regime's defeat to rebels would spell the end for Syria.".......I'll take my chances with the rebels any day over the regime like most will. So pack it up and move out!

It will be a cold day in Hell before Lebanon allies with Iran. Even when M8 was in full control of the government, they didn't take the entire country in that direction and only kept that alliance to a single militia. what does that tell you about having Iran as an ally?
and they answer to your last question is YES!

what more needs to be said....

He is right in saying that the demise of his regime spells the end for syria. The question he should ask himself is if he did play a role that led it the current situation. The sad thing is that his regime wasted too much time in the lebanese muddy world of politics and totally overlooked what was cooking inside syria.It seems like that he sacrifice his nation for the iranian cause.Very sad to see what once was a beautifull country and now is demolished.His late father would have never allowed this to reach this point.

Of course hafez would have allowed it to go as far. Just look at the hama massacre. What if people had risen not only in hama but in most of syria back then? There would only be 20 % of syrians left. Lebanon was also destroyed but it was rebuilt (partly) so dont talk as if there is no hope.

Assad is in the same class of Al-Qaeda. Both use civilians as collateral damage in order to gain power.

Go Bashar , Go , you have the guts to face the Qaida/ Nusra fanatics , don't give up we are behind you !!!!

Don't use our Lords name in Vein...it shows that you're not Christian

Like everybody here: GO Al-Quaida GO! I love having an islamist state next to mine. why not? we already have a jewish one!

And how has the current Syria been any better to Lebanon than Israel? Compare the destruction and death they have directly inflicted upon us by both and come back with an answer.