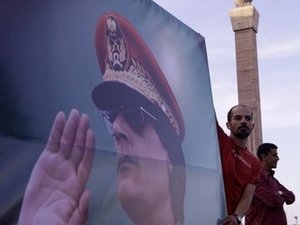 The ICC's Luis Moreno-Ocampo had said Wednesday that there was evidence the Libyan authorities bought "Viagra-type" medicines and gave them to troops as part of the official rape policy.

But Cherif Bassiouni, who is leading a U.N. rights inquiry into the situation in Libya, suggested that the claim was part of a "massive hysteria."

Bassiouni told journalists that he had heard those claims when he visited rebel-held eastern Libya. But when he went to Tripoli, "the same story comes up."

"This time it's the government people telling us, 'you know what? The opponents have a policy of rape, we have discovered that they are giving out contraceptives and Viagra pills, '" he recounted.

"So I told them, 'this is exactly what the other side told us,'" he added.

"What it is, at least my interpretation of it is, when the information spread out, the society felt so vulnerable ... it has created a massive hysteria," said Bassiouni.

The investigator also cited the case of a woman who claimed to have sent out 70,000 questionnaires and received 60,000 responses, of which 259 reported sexual abuse.

However, when the investigators asked for these questionnaires, they never received them.

"But she's going around the world telling everybody about it ... so now she got that information to Ocampo and Ocampo is convinced that here we have a potential 259 women who have responded to the fact that they have been sexually abused," Bassiouni said.

He also pointed out that it did not appear to be credible that the woman was able to send out 70,000 questionnaires in March when the postal service was not functioning.

Nevertheless, the investigator said his team will examine the claims.

For the moment, the team has only heard of three cases.

"We've not investigated these cases, we hope to be able to investigate them. These would be in the midst of a military operation, a field operation. These would clearly be a war crime," he added.

"For the moment the numbers are very limited, but they've had a tremendous socio-psychological impact on society. Everybody's talking about it. That's where we're at," said the investigator.