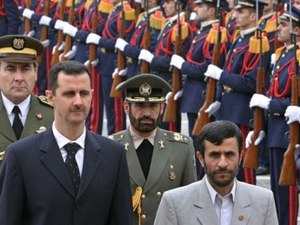 Britain said Thursday it stood by allegations that Iran is helping Syria violently crush protests, after the British envoy in Tehran was summoned to the foreign ministry over the claims.

Iranian state television earlier reported that officials had told British Charge d'Affaires Jane Marriott that the comments by Foreign Minister William Hague on Tuesday were "based on a series of lies."

In London, a spokesman for the British Foreign Office said that following Iranian media reports it could confirm that Marriott had been summoned to the Iranian Ministry of Foreign Affairs on Thursday.

"The Charge was asked to explain recent UK statements on Iran, including on Iran’s role supporting the Syrian regime in crushing protests. The UK stands by its statements," the spokesman said.

"We remain extremely concerned by the Iranian government’s repression of its own people and its support for violent elements in the region.

"We have seen credible information suggesting Iran is helping Syria with the suppression of protests there, including through the provision of expertise and equipment.

"We had already raised this issue with the Iranian Charge in London."

The Foreign Office spokesman said Iran had also failed to respond to "clear evidence" of its provision of arms to Taliban militants in Afghanistan, adding that it had already referred the matter to the United Nations for investigation.

Hague said in a statement to British lawmakers on Tuesday that Tehran was providing material for President Bashar al-Assad's government as it violently suppresses protests against the regime.

"Iran is combining brutal suppression of opposition leaders at home with the provision of equipment and technical advice to help the Syrian regime crush protests in Syria. This is unacceptable," Hague said.

A British government official told Agence France Presse there was credible evidence that Iran had supplied Syria with riot control gear and training from the Iranian Revolutionary Guard Corps.

Iranian state television's website quoted an unnamed official in Iran's Foreign Ministry as saying: "These (Hague's) remarks are completely unfounded and baseless and are based on a series of lies.

"The British government does not have the qualifications to comment on other countries, as it is known for its interventionist actions and destructive role in regional developments, particularly its training of the security forces of certain countries to be used for crackdown," the Iranian official added.

The United States and Syrian opposition groups have previously accused Tehran of helping the Syrian regime, its main Arab ally, to repress the opposition, with more than 1,100 people killed since mid-March, according to rights activists.

Iran has denied the allegations.

Meanwhile, wounded Syrian refugees crossing into Turkey claimed Thursday that Iranian forces have been taking an active part in crushing the protests against Assad's regime.

Speaking from their hospital beds across the border in Turkey, several wounded refugees said they had seen troops in black uniforms firing on protesters.

"There were police officers in plain clothes, but also Iranian soldiers," said Mustafa, one of dozens of young Syrian men being treated for gunshot wounds in Turkish hospitals.

"I saw them with my own eyes. We asked them not to shoot but they did not speak Arabic," said the 23-year-old salesman, who was shot in the leg and arm when security forces fired on demonstrators in the northwestern city of Idlib.

"They had beards. Wearing a beard is forbidden in the Syrian army," he said, adding that their black uniform is also unknown in his homeland.

The incident happened on May 20 when security forces flooded into the city and opened fire on a crowd chanting anti-regime slogans outside a mosque after Friday prayers.

Akram, a 17-year-old student, nursing a gunshot wound at another hospital in Antakya, painted a similar picture of "men in black" accompanying security forces who opened fire in his village outside Idlib.

"They were snipers and did not speak Arabic. And as well as that, they had guns of a model we do not know," said Akram, who was hit in the leg.

He has no doubt the shooters were Iranian. "They are Iranians, the Basij," he said, referring to Iran's paramilitary forces.

Velit, 23, from a different village near Idlib, was more cautious.

"I cannot say that they were certainly Iranians, but the obvious thing is that they were not Syrians," he said, nursing a gunshot wound in his right leg.

Velit insisted the men could not be confused with Syria's shabbiha paramilitary forces, who sometimes dress in black. "Those we know," he said.

The men he saw "were wearing black uniforms, white shoes, had long beards and shaved heads".

"I saw seven or eight of them, while I was helping the wounded people. They were shooting along with officers in plainclothes, while Syrian soldiers were staying behind. They were very tall and sturdy," he said.

The Washington Post reported late last month that Iran has sent trainers and advisers to Syria to help crush the protests threatening to topple Iran’s most important ally in the region.

The newspaper said the Quds Force, an elite unit of the Iranian army, has been playing a key role in the crackdown.