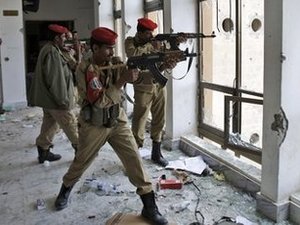 The attack that injured Yemeni President Ali Abdullah Saleh was an assassination bid, likely an "inside job," using an explosive device, not a mortar or tank round, U.S. experts said Thursday.

STRATFOR, a U.S.-based authority on strategic and tactical intelligence issues, said its assessment was based on an evaluation of photographs taken of the blast site, a mosque inside Saleh's presidential compound in Sanaa.

"And as we've looked at these pictures very closely, it's enabled us to ascertain that it was indeed an improvised explosive device (IED) used in the attack, not some sort of military munitions like a mortar round or a tank-guided missile."

In a video posted on STRATFOR's website (http://tinyurl.com/5wgstoo), Stewart walks viewers through the logic underlying the conclusions.

"If you look at the way the blocks fell off the building, it really appears that they were pushed outward, and not some sort of impact from the outside," he said.

"Of course, also when you look at the window frames that are protruding from these windows you can also see that the force of the blast was coming out, not inward into the building."

Stewart pointed out a small hole in a concrete wall, which STRATFOR experts believe is the place where the device was planted.

"Just look at the pattern of the residue on the wall there, the black soot and even the debris in the room; you can tell that it is radiating from that point on the wall," he said.

"One other thing to consider is, as we look at the placement of this device, it was done by someone who knew Saleh's routine," Stewart said.

"It was done by someone who knew the compound. Another thing to remember is that there have been hostilities going on now for weeks between Saleh's supporters and his opponents and the protesters," he said.

"Because of this, because of the exchange of fire that has happened and the hostilities, the guard at this presidential palace compound would have been up. This indicates to us that it is likely that this was an inside job."

Saleh was flown to Saudi Arabia for treatment on wounds sustained in the June 3 attack. His exact condition is unclear. He reportedly suffered serious burns, but Yemeni officials insist he is out of intensive care and stable.