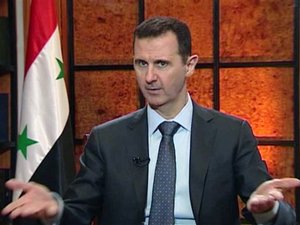 With the conflict ravaging his country in its third year, Syrian President Bashar Assad is maintaining a hardline stance, insisting he will triumph over rebel forces and all but ruling out dialogue.

In an interview broadcast on Wednesday, the embattled leader struck a combative tone, again dubbing the opposition forces fighting his regime as "terrorists" and saying there was "no option but victory."

"It was a very provocative address. He is even more determined than before," Rime Allaf, a Syria expert at London's Chatham House think tank, told Agence France Presse.

"He told the international community: 'We will continue to do everything we can to remain in power while you are doing nothing but creating problems in the region,'" she said.

"He is taking the pulse of international opinion to see how it will react."

The regime has long described rebel forces as "terrorists," and has seen its narrative bolstered by the emergence of the jihadist Al-Nusra Front, which last week pledged allegiance to al-Qaida chief Ayman al-Zawahri.

Assad seized on the link, accusing the West of backing al-Qaida, and warning that it would pay for supporting it.

"The West has paid heavily for funding al-Qaida in its early stages in Afghanistan. Today it is doing the same in Syria, Libya and other places, and will pay a heavy price in the heart of Europe and the United States," he said.

Assad "spoke with plenty of confidence. I think that before this interview he got the support of his allies, the Russians, and the Iranians," Allaf noted.

"He's confident that he can count on all his supporters, and knows that the United States and others are still unsure about what they should do," she said.

The Syrian president left little room for the prospect of dialogue, coming close to ruling out anything but a military victory by the regime.

"There is no option but victory," he said.

"Otherwise it will be the end of Syria, and I don't think that the Syrian people will accept such an option."

"The truth is there is a war and I repeat: no to surrender, no to submission."

He also appeared to suggest he might stand for the presidency in elections scheduled for 2014.

"The position (of president) has no value without popular backing. The people's decision is what matters in the question of whether the president stays or goes," said Assad.

Yezid Sayigh, a Syria specialist at the Carnegie Endowment's Middle East Center, said Assad's tough line also included a message intended to reassure his people and boost the morale of his troops.

"Ultimately this was a message to underline his intention to remain in the presidency 'until the Syrian people can decide,' meaning next year's scheduled election," he told AFP.

The interview "seemed aimed at delivering a message of confidence to Syrians."

"The regime wants to convince its people that it can be more representative of the various components of Syrian society than the opposition," added Peter Harling, project director of the International Crisis Group's Middle East program.

"I think they're trying to show that normalization is possible... to convince people that the regime offers more possibility of being a state than the opposition is or can."

Assad's focus on the humanitarian efforts of the Syrian army and Syria's allies, as well as a long discourse on relations with the Kurds, are part of that effort, Harling said.

"This is a regime which is adjusting to the conflict," he said. "It's extremely resilient because it's evolving."

Hmmm, looks like the FSA-AL Qaeda terrorists are losing ground by the day.

funny assad... he financed many islamst terrorist groups for years and now complains... lol! he sent islamist groups in lebanon to destabilize the country so now he is tasting his own medicine....