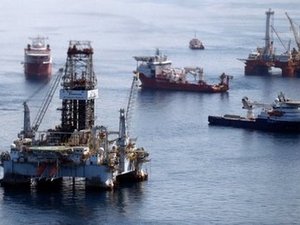 The oil spill disaster in the Gulf of Mexico could cost BP 40 billion dollars, the energy group revealed on Tuesday with shock figures ramping up the bill by almost a quarter.

BP said it had taken an additional charge of 7.7 billion dollars during the third quarter, taking the company's total estimated clean-up and legal costs to 39.9 billion dollars (28.6 billion euros).

"The update provides a stark reminder that the fallout from the spill will follow BP for some considerable time to come," said Richard Hunter, head of UK equities at Hargreaves Lansdown Stockbrokers in London.

"It remains to be seen whether the renewed provision of 40 billion dollars will finally kill the issue or whether, as is also possible, it will prove to be an overestimation."

But the British oil giant also reported a net profit of 1.785 billion dollars for the third quarter in contrast to a loss of 16.9 billion dollars during the second quarter of this year, a huge turnaround.

The Gulf of Mexico oil disaster was triggered by a blast on the Deepwater Horizon rig -- leased by BP and operated by Transocean Energy -- that killed 11 workers on April 20.

The broken well was eventually plugged but not before it gushed about 4.9 million barrels of oil into the Gulf waters. The spill destroyed hundreds of miles of fragile coastlines and caused BP's share price to collapse.

It also forced the resignation of chief executive Tony Hayward and BP to announce that it was selling assets worth up to 30 billion dollars.

"We have made good progress during the quarter. This strong operating performance shows the determination of everyone at BP to move the company forward and rebuild confidence after the terrible events of the past six months," Dudley said in a group statement.

"We have also begun to make important changes in the way we operate across the group ... to ensure that safety and risk management are embedded as the absolute priority for every operation, for every person, throughout BP."

Last week, Dudley insisted that BP would not quit the United States over the disaster that he said had "threatened the very existence" of the company.

U.S. authorities have severely criticized BP over its handling of the spill, while the company is currently defending itself against tens of billions of dollars in potential U.S. fines and legal liabilities.

BP said on Tuesday that the additional pre-tax charge of 7.7 billion dollars was mainly the result of increased costs for responding to the spill.

"This reflected a delay in completing the relief well that finally sealed the Macondo well in September, additional mandated costs for decontaminating and demobilizing vessels involved in the response, claims centre administration costs and additional legal costs," the company added.(AFP)