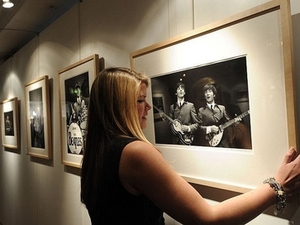 Fifty unpublished photos of The Beatles at their first U.S. concert in 1964 went on show in London on Friday ahead of an auction in New York, offering an intimate glimpse of the band just as they hit the big time.

The black and white shots were taken by photographer Mike Mitchell, who was just 18 years old when the Fab Four, themselves little older, came to his home town of Washington, and presented him with the opportunity of a lifetime.

He was granted exceptional access to the gig at the Washington Coliseum on February 11, 1964, just two days after the band's U.S. television debut on the Ed Sullivan Show, which was watched by 73 million people.

The photos captured the frenzy and excitement of early Beatlemania, but have been locked away in Mitchell's basement for 46 years.

They are now being displayed at Christie's auction house and at the Hotel Marriot at Grosvenor House in London before being moved to New York for sale at auction on July 20, where they are expected to fetch £100,000 (113,000 Euros/$162,000).

"Only later I realized that this Washington concert was considered so important to the eyes of specialists," Mitchell told Agence France Presse.

"It was great, there were all these screaming girls -- they were mostly girls -- and we were all so young.

"I loved the music. I identified with it. The sound was so different and so alive."

Cathy Elkies, director of Iconic Collections at Christie's, said it was increasingly rare to find unpublished pictures of the band, and of such quality.

Whether showing a thoughtful John Lennon holding a cigarette, a fresh-faced Paul McCartney singing right up to the microphone, Ringo Starr's hands or George Harrison's profile, the photos are taken so close up you feel you are there.

"The intimacy of these images is just incredible. And they're so young, these were still the early days," said Elkies.

She added that such pictures "would be impossible today, when there is so much exposure" of bands.