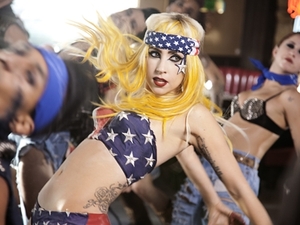 Lady Gaga arrived in Rome on Saturday for a gay rights parade at which hundreds of thousands are set to voice their defiance against the Vatican and Silvio Berlusconi's "backward" government.

Organizers of the EuroPride event say they want to stress that Italy is a laggard in terms of gay rights in Europe, with no specific laws against homophobic violence and no provision for gay civil unions.

Paolo Patane, director of Italian activist group Arcigay, said he hoped the parade would help "push out" the Berlusconi government, which is already reeling from a humiliating defeat in local elections this month.

The leaders of two small opposition parties -- Italy of Values and Left, Ecology and Freedom -- have said they will attend the parade, which also comes on the eve of referendums that will again challenge the government.

Organizers say they are expecting around a million people at the parade, while police forecasts range between 300,000 and 500,000. Tight security measures are in place to prevent any possible outbreaks of violence.

A small protest is planned by a religious group calling itself "Militia Christi," and Catholic politicians have warned Lady Gaga, a vocal advocate of gay rights, against making provocative statements about the pope.

"The gay world does not feel represented by someone who makes videos that offend Jesus," said Rocco Buttiglione, the deputy speaker of parliament.

"If Lady Gaga attacks the Holy Father or the Catholic Church, millions of gay moderates will not recognize themselves in those comments," he said.

Carlo Giovanardi, a junior minister for family policy, dismissed the event as "a chance to mock the Holy Father, make fun of the clergy and those who dedicate their lives to others and dress up in all sorts of costumes."

Referring to Lady Gaga, he added: "Maybe she is badly informed about our country since all the opinion polls prove that an overwhelming majority of Italians are against marriage between a man and a man and a woman and a woman."

The 25-year-old U.S. singer, ranked this year's most powerful celebrity by Forbes magazine, spoke out last year against a U.S. policy, since scrapped, which forces gay servicemen and women to keep their sexuality secret or face dismissal.

Lady Gaga is expected to give a short speech at around 9:00 pm (1900 GMT) at the Circus Maximus -- an ancient Roman arena often used for concerts -- and will reportedly sing her hit single "Born This Way," which celebrates diversity.

The parade through central Rome is set to kick off at around 4:00 pm with around 40 floats taking part including one called "Rainbow Families" with gay parents and their children and others with drag queens dressed as Lady Gaga.

Vladimir Luxuria, a transgender former member of parliament who organized Italy's first gay pride festival in 1994, said the event would be more of a protest than a celebration because of the situation in Italy.

"The fish stinks from the head and we have a prime minister who is a gay-basher," Luxuria told Agence France Presse in an interview. Patane agreed, criticizing what he said was Italy's "most backward government" since World War II.

Berlusconi last year dismissed a sex scandal with a homophobic comment saying: "It's better to be passionate about beautiful women than to be gay."

Activists quickly came up with a slogan printed on placards and T-shirts reading: "It's better to be gay than to be Berlusconi."