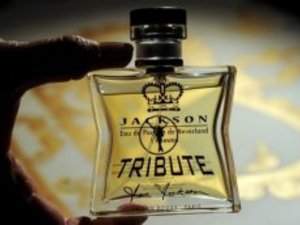 The botched launch of a perfume in memory of pop icon Michael Jackson caused a stink this week, as his father distanced himself from a Frenchman behind the deal, and a lawsuit disputed their rights.

The scents were due to be presented to the world at a press conference Thursday in a nightclub at the Caesars Palace hotel-casino in Las Vegas, with socialite Paris Hilton and various Jackson family members involved.

But the event descended into chaos when Joe Jackson, backed briefly by his daughter LaToya, made it clear he wanted to avoid any physical contact with Rouas, head of the perfume company Julian Rouas Paris.

In addition no release date was announced for the fragrances, presented as inspired by the aromas of plants in the grounds of Neverland, the late pop icon's ranch home before his shock death in June 2009, aged 50.

"I don't like the way he does things. But the initiative to create the scents was mine, and that plan goes ahead," Joe Jackson told Agence France Presse, while saying her did not know when the 50 ml bottles would go on sale.

The Jackson patriarch played down the legal problems with using his dead son's name, a money-spinning brand owned officially by an estate from which he was excluded in the King of Pop's will.

"They can say whatever they want .. I am the father, he was my son and I can decide what to do on his behalf and in his honor," said the 82-year-old, clad in a black suit, red necktie, fedora hat and various gold chains.

"There are many interests around the legacy of my son, companies that want everything, but I have a foundation that allows me to launch projects with his name, the name of my son."

The tension between Jackson and Rouas was obvious even before a press conference attended by more unknown models than journalists, and no members of the U.S. media.

But more problematic was a lawsuit filed in a Los Angeles court a day before the botched launch, on behalf of Bravado, the company which holds the commercial rights to sell products under Michael Jackson's name.

The lawsuit said Rouas and Jackson were "unlicensed distributors who have been using the Michael Jackson trademark and/or a mark confusing similar thereto .. in connection with perfume that defendants are attempting to sell."

Bravado seeks a ban on the perfume's sale, as well as 150,000 dollars in damages and 750 dollars for each time Jackson's name is wrong used on a product.

"Some people will always try to prevent my efforts because they do not want me and there are some media, like TMZ, that are against me," Jackson said, referring to the celebrity news website. "But they can't do anything."

La Toya Jackson gave her backing, albeit briefly, saying: "My family is delighted with this tribute to my brother from my father, the scents are delicious."

The French perfumer meanwhile said he had known the singer's father since 2009, when Jackson approached his company "because he wanted to make a perfume as a tribute to the memory of Michael Jackson.

"He is a little angry with me now because someone put online, on the Internet, the contract which we made for the perfume, but it wasn't me who did it," he added.

"The perfumes will be on sale in the U.S. very soon, and in September in France," he said, adding that a 50 ml bottle will cost 40 dollars in America and about 40 Euros in France."

The investors behind the project are American, and appeared more cautious about the legal challenge.

"The plan is to release the perfume wherever we have the final version," said Zach Cole, one of Rouas's partners. "Obviously we're in a sticking point and we have to be very careful about it," he said.

"There's no deadline yet (for the release of the perfume), but it's coming close," he added.

Julian Rouas is a very bad company with a dark past (and present) I wouldn't buy nothing from Julian Rouas. Fond put the ugly truth about this shady businessman at. Http://jacksontributefragrances.blogspot.com