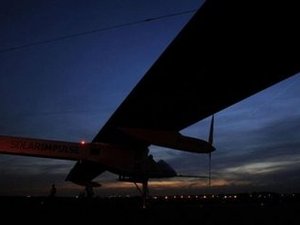 Swiss solar-powered aircraft Solar Impulse will make its second international flight from Brussels to Paris on Saturday, where it will be showcased at an international air show.

The pioneering aircraft is expected to take off between 1200 and 1600 GMT in Brussels and land around 2200 GMT at the earliest at Le Bourget near Paris, its press office said Friday, after several delays due to unfavorable weather conditions.

Rain and strong winds will keep the lightweight plane grounded as the maximum wind speed for it to take off safely is seven knots.

Solar Impulse HB-SIA, which has the wingspan of a large airliner but weighs no more than a saloon car, made history in July 2010 as the first manned plane to fly around the clock and through the night on the sun's energy.

Last month it completed its first international flight from Switzerland to Belgium.

HB-SIA relies on 12,000 solar cells on its 64-metre (200-foot) wings to charge the batteries that provide the energy for the 10-horsepower electric motors driving four propellers.

It holds the endurance and altitude records for a manned solar-powered airplane after staying aloft for 26 hours, 10 minutes and 19 seconds above Switzerland, flying at 9,235 meters (30,298 feet).

This time, the high-tech plane is expected to rise around 2,500 meters in altitude. The flight will be transmitted live on www.solarimpulse.com.

The Solar Impulse team is aiming to make possible transamerican, transatlantic and round-the-world flights -- in stages -- in 2013 and 2014 using a slightly larger aircraft.

The 49th international air show at Le Bourget runs from June 20 to 26.