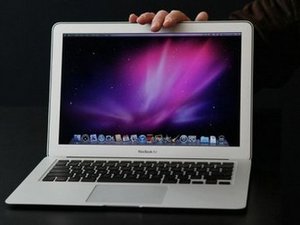 The latest model of Apple's ultra-light MacBook Air is scheduled to hit the market by the end of this month, media in the computer manufacturing hub of Taiwan reported on Tuesday.

The first shipment of the next-generation MacBook Air -- the thinnest line of Apple's notebook computers, holding a hard drive and disc player -- will be 380,000 units, the Taipei-based Economic Daily News said.

An 11.6-inch model will account for 55 percent of the units in the first batch, and a 13.3-inch model the rest, according to the paper.

It said that about 90 percent of MacBook Airs would be assembled by Taiwan's Quanta Computer, a leading contract computer manufacturer.