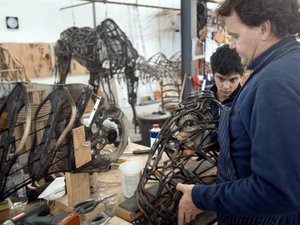 The bits of molded cane and metal on the Cape Town factory floor are destined to be stars: majestic horses that flick their tails, rear up and gallop with astonishing life-like ease.

The parts -- hollow legs, heads and chesty frames -- are future giant puppets created for the hit British play "War Horse", which has taken both the West End and Broadway by storm.

The World War I drama scooped up six Tony awards in New York on Sunday, including best play and a special Tony for its South African creators.

"It's astonishing. It's amazing to see how at interval the entire house feels like it's weeping."

The story tells of a boy's horse shipped to France in World War I and his owner's search for him.

The main characters, Joey and Topthorn -- each fluidly operated by a trio of puppeteers with two inside their giant frames and one at the head -- have spellbound and stirred audiences since opening in London in 2007.

"I think we wouldn't be in this business if we didn't believe that puppets had the power to do that. But War Horse has been the show that's proved it strongest," said Jones's partner Adrian Kohler.

After turning to adult puppetry in 1985, Handspring is no stranger to global acclaim, and has joined forces with South African artist William Kentridge in productions like "Woyzeck on the Highveld" and "Faustus in Africa".

But with the success of War Horse, activities in their workshop are overwhelmingly equine: a hovering Topthorn unfinished skeleton, fiddly wire work on massive heads and giant resin eyeballs under brushstrokes.

"It was a really, really good feeling to see them in action. I was very proud," said head puppet engineer Jessica Mias-Jones, who saw the show in London.

"You can't really imagine it until you see it. It's quite something. Seeing it standing around in the factory is nothing, but seeing it onstage is really incredible because it really is alive."

The company was approached after their play "Tall Horse" starred a giant giraffe operated by traditional Malian puppeteers on stilts.

But the horses not only had to mirror their real-life counterparts with heaving flanks and ear-wiggling abilities, they also had to support human riders -- a first-time challenge for the 30-year-old company.

"From our point of view, the movement of the puppet is absolutely the most important part. The look of the figure comes almost secondary," said Kohler.

"It's good if the look is sculptural, but primarily it's got to move and the actors inside of it have to have the space to move and the ability to see all around. So those were starting points and they determined quite early on the nature of the materials we used."

Soaked cane rods, resilient enough to bounce back from collisions, shape the horses with a series of hinges and metal including an aluminum bridge to support the rider.

"We were terrified because we just weren't sure at all that worked, and fortunately it did and it worked very well," said Kohler about the first carrying capacity test in front of 20 people in London.

"It was the workshop that convinced the theatre bosses that this was a project that they should green light because the horses were able to walk and trot and carry people."

The puppets in London have done more than 1,000 performances and travel with an extra head, four back up legs and an instruction manual. Each set has a total of nine horses, six soldiers, two crows, two swallows and a goose.

Stringently trained and even sleeping in stables, the teams of puppeteers develop instinctive skills that transform the constructions into what reviewers have called "enchantment", "superlative puppetry" and "the stars of the show".

"It's a really great honor for our company," said Jones about Sunday's special Tony.

The Tony Awards, which are given for best Broadway achievement, are considered the theater equivalent of the Oscars.

"Both the makers and the performers are part of what Handspring is and each has a totally different set of skills, but they are both of a very high order. So that's where the award goes really -- to them."