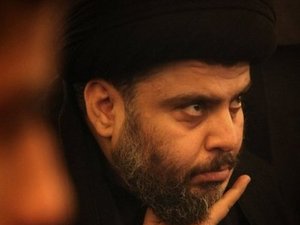 Iraqi Shiite cleric Moqtada al-Sadr on Tuesday called on Bahrain to pardon two Shiite protesters sentenced to death over the killing of two policemen in the Sunni-ruled kingdom.

"I ask the government of Bahrain to grant an amnesty for the two young people sentenced to death for participating in peaceful demonstrations," he said in a statement from his movement's headquarters in the Iraqi holy city of Najaf.

On May 22, a special Bahrain court upheld death sentences for the two, Ali Abdullah Hasan al-Singace and Abdul Aziz Abdullah Ibrahim Hussein, despite international calls for them to be spared.

The pair, and five others who received life sentences, were accused of running over two policemen during pro-reform protests earlier this year.

"These things put distance between the government and the people," Sadr said in the statement. "The government must get closer to the people, and work for their interests."

Shiites, who form a majority in the Sunni-ruled kingdom, began demonstrations in Bahrain on February 14 but were crushed by security forces the following month.

Authorities said 24 people, including four policemen, were killed in the unrest.