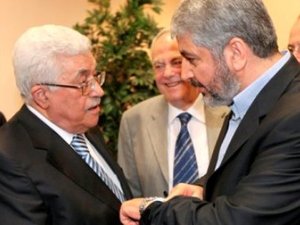 Palestinian President Mahmoud Abbas will meet Hamas chief Khaled Meshaal in Cairo next week to finalize a new government put together by the two factions, a top official of his Fatah movement said Tuesday.

The meeting was announced as Palestinian factions were in Cairo for reconciliation talks aimed at choosing a prime minister to head the unity government.

"Today, during the talks between the Fatah and Hamas delegations, a meeting was scheduled for next Tuesday between President Abbas and Meshaal to finalize the formation of the new government," said Azzam al-Ahmed, who heads the Fatah delegation at the talks.

"They also decided that this meeting will be the last to finalize the issue of the government," he told Agence France Presse.

Fatah met with a Hamas delegation headed by Moussa Abu Marzouq at the Egyptian intelligence headquarters.

Fatah has said it wants to retain prime minister Salam Fayyad to head the government, but the nomination was immediately rejected by the Islamist Hamas movement.

Fayyad told reporters in the West Bank city of Ramallah that he would not want to be a stumbling block in the reconciliation deal.

"I assure you that there is no way I can accept that the formation of the unity government be delayed because of me," Fayyad said.

"I will not impose myself on anyone, and I do not want any side to perceive me as being imposed on them. But if there is an agreement on my (nomination), I will be willing to take on the task," he added.

Both Fatah and Hamas said they were optimistic they would come to an agreement.

"God willing, this will be the last round of talks regarding the formation of the government," Ahmed told AFP ahead of the meeting.

"We hope to agree on the name of a prime minister and the members of the government ... We, in Fatah, insist on ending the chapter of division and to implement the deal on the ground. We are optimistic," he said.

The Egyptian-sponsored talks are the fruit of a reconciliation agreement signed in Cairo in May aimed at ending years of bitter feuding and laying the groundwork for presidential and parliamentary elections within a year.

Fatah's central committee agreed on Saturday to throw their support behind Fayyad, a former World Bank official and preferred candidate of the international community.

But Hamas has rejected Fayyad, blaming him for the arrest and alleged torture of its leaders, and plunging the Palestinian Authority into debt.

Izzat al-Risheq, a member of the Hamas politburo, said ahead of the Cairo talks that the best way forward in forming the unity government was to exclude controversial candidates.

"A main principle we have agreed on is that thorny issues or disagreements be dealt with by both sides through consensus. Therefore the government will be one of consensus and no side will impose its view on the other," Egyptian state news agency MENA quoted Risheq as saying.

"We feel the best way is to exclude controversial choices," he said.

"Hamas informed Fatah during the last meeting of its rejection of the choice of Salam Fayyad to head the new government," Abu Zuhri told AFP.

"The Fatah central committee's nomination of Salam Fayyad to head the government is a Fatah nomination and any head of the new government must be chosen by consensus and not, of course, by one of the parties."

Hamas has yet to put forward a candidate for the prime minister's post.

Risheq said the two sides will also be discussing the release of political prisoners.