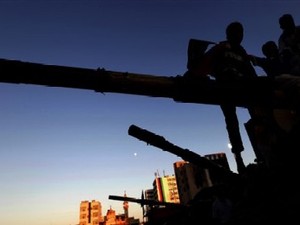 Shells and rockets fired during combat in battle-torn Libya breached the border with Tunisia on Tuesday, witnesses told Agence France Presse, one reporting a large Tunisian military presence on the frontier.

A resident told AFP he counted 10 shells that landed inside Tunisian territory, some of them north of the city of Oued Erouth in a district to the west of Dehiba, about 1.5 kilometers from the border.

"We had a sleepless night, there was heavy fire on the Libyan side, but it was only today that the shells began to fall on Tunisian territory," he said in a telephone call.

He described a massive Tunisian army presence at the border and military planes and helicopters surveying the area.

"The fighting is coming closer and closer, preventing us from sleeping and leading a normal life. A shell could stray at any moment and land on our heads," said the civil servant, who wanted to remain anonymous.

Police and the National Guard in Dehiba however disputed the information, saying no shells fell across the border on Monday evening or Tuesday.

In Tunis, defense ministry official Mokhtar Ben Nasr did not confirm the witness accounts either.

More than 20 shells fired during combat between rebels and pro-Gadhafi troops fell in the Dehiba area last month.

The border post, one of the main passage points for Libyan refugees, has been the focus of intense fighting since the end of April.

It was recaptured by Gadhafi soldiers after being seized by rebels, only to be taken again by the insurgents.

Tunisia's government protested to its neighbor in May, threatening to report the matter to the United Nations.