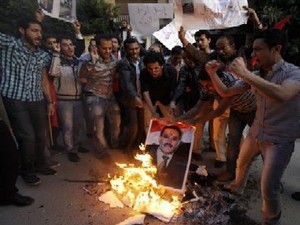 Oil-rich Gulf states will press their efforts to broker an end to a political crisis in impoverished Yemen, the UAE foreign minister said on Tuesday.

"The unstable situation in Yemen is top of our agenda," Sheikh Abdullah bin Zayed al-Nahayan told a foreign ministers' meeting of the six-nation Gulf Cooperation Council in the Saudi Red Sea city of Jeddah.

"We have made huge efforts to reconcile the opposing points of view and our efforts are certainly going to continue without let-up," Sheikh Abdullah said.

The conflict has so far seen hundreds of people killed in five months of protests.

The Gulf ministers had come under huge pressure from opponents of veteran Yemeni President Ali Abdullah Saleh to back an interim council to oversee a transition from his 33-year rule.

Saleh is currently being treated in a Saudi hospital for blast wounds he sustained in a bomb attack inside the presidential palace in Sanaa.

He was wounded as the long months of protests against his rule degenerated into street fighting in the capital between loyalist troops and dissident tribesmen.

Yemeni opposition activists had called on the Gulf ministers to "stand with the will of the people in forming a transitional council that would achieve the aims of the revolution."

The "Youth Revolution" activists, who have been organizing nationwide protests against Saleh's rule since January, have called on Vice President Abdrabuh Mansur Hadi to form the proposed interim council immediately.

Saleh's "corrupt regime... has used your initiative as a cover for its crimes against us," the activists said in a statement, referring to a Gulf-brokered transition plan that the veteran ruler has stalled for months.

Despite strong Western pressure, Saleh has repeatedly refused to sign up to the proposals under which he would hand power to the vice president within 30 days in exchange for a promise of immunity from prosecution.

"Yemen without this regime will be safer and more stable and committed to effective cooperation with its brothers and friends and to all regional and international agreements and accords it was part of," the activists' declared.

Tens of thousands of people demonstrated in the Yemeni capital on Tuesday against Saleh's return.

Similar rallies were held in other cities across Yemen.

Yemen's General Union of Chambers of Commerce and Industry warned of a "total collapse" of the nation's economy if the turmoil continued.

It called on the international community to "use all forms of pressure... to facilitate the transfer of power in Yemen in order to fill the political, security and economic vacuum the country is currently suffering from."

In Washington meanwhile, a top U.S. State Department official said the U.S. was still cooperating with Yemen in the fight against al-Qaida despite the crisis.