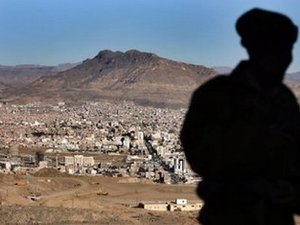 Dozens of alleged al-Qaida gunmen attacked security and government buildings in the southern Yemeni town of Huta on Wednesday killing a policeman and wounding six others, medics and residents said.

Fierce clashes broke out at dawn between the armed men and police around the local branches of intelligence and central bank, and the courts in Huta, in the Lahij province, residents said.

A medic at Ibn Khaldun hospital said it received the body of one policeman killed in the attack while six others were hospitalized.

Residents said the suspected al-Qaida militants spread out in farms surrounding the city.

The attack raised fears that Huta might fall in the grip of the jihadists after gunmen overran most of Zinjibar in late May.

Yemen's security forces have been heavily deployed in Aden amid fears that clashes between the army and alleged al-Qaida gunmen might spread to the strategic port city.

At least 81 soldiers and police have been killed and more than 200 others wounded in the Zinjibar clashes, according to a military official.

In a statement distributed Wednesday, the "supporters of Sharia" (Islamic law) militant group condemned air raids last week against militant hideouts, naming a number of air force pilots as targets for revenge and offering a bounty for those who help in capturing them.

Security officials say the militants are al-Qaida fighters, but the opposition challenging the rule of President Ali Abdullah Saleh accuses the government of inventing a jihadist threat to head off Western pressure on his 33-year rule.

Yemen is the home of al-Qaida in the Arabian Peninsula, an affiliate of the slain Osama bin Laden's militant network. The group is blamed for anti-U.S. plots including trying to blow up a U.S.-bound airplane on Christmas Day in 2009.