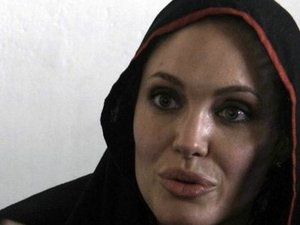 Hollywood superstar Angelina Jolie has asked to visit refugee camps in southern Turkey where thousands of Syrians who fled a crackdown in their homeland are now staying, a Turkish diplomatic source said.

Turkey's foreign ministry was "currently considering the request" by Jolie, who is a goodwill ambassador for the United Nations refugees agency (UNHCR), said the source.

Turkish officials say more than 8,000 Syrians are now camped in Turkey after fleeing the crackdown on pro-democracy demonstrations. Many of them are from Jisr al-Shugur, a town some roughly 40 kilometers (25 miles) from the Turkish border, which has been the scene of a major army operation.

Jolie is noted for her humanitarian work and paid a surprise visit to Afghanistan in March to visit refugee camps.

and what about the palestinain refugees? .. oh yeah their oppressor is your friend unlike Assad. I almost forgot.