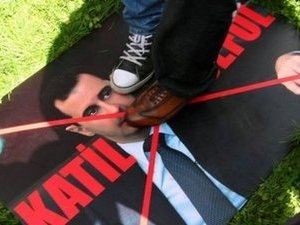 An envoy of Syrian President Bashar Assad was to hold talks on Wednesday with Turkish Prime Minister Recep Tayyip Erdogan who has been urging the Damascus regime to halt its crackdown on protesters.

Erdogan would host afternoon talks with Hassan Turkmani in Ankara on "the developments in Syria", a government source told Agence France Presse.

The Turkish prime minister has traditionally enjoyed good relations with the Syrian leader but he has been increasingly critical of the repression across the border.

In a phone call to Assad on Tuesday, Erdogan urged him to "refrain from violence and end the unrest", according to Turkey's Anatolia news agency.

Erdogan last week accused the Syrian security forces of perpetrating an "atrocity" with their treatment of the bodies of women protesters who have been killed in the regime's efforts to quell revolt.

Thousands of Syrians have crossed over into Turkey in recent days, many of them fleeing a major army operation in the town of Jisr al-Shughur, roughly 40 kilometers from the border.

Turkish Foreign Minister Ahmet Davutoglu was due to travel to the Hatay region on Wednesday to inspect reception facilities for the refugees and meet with Syrians crossing the border, Anatolia reported.

Davutoglu will also host a meeting on Thursday with Turkey's ambassadors in Arab capitals to discuss the Syrian crisis and the impact of the pro-democracy uprisings across the Middle East and North Africa.

Erdogan has said Turkey will "not close its doors" to the refugees.

Say Naharnet, as i write this there are over a million people in Damascus raising the biggest flag ever made which stretches 2300 meters, in response to all the other fake demos which have circulated in biased reporting such as those of your site, the crowd includes syrian students and youth chanting with pro assad and anti international intervention slogans, I wonder why it's not in your front page lately or even "late" in reporting if it ever gets reported..
so much proof of so much corruption in the media, don't blame you, you got so many sheep behind you who don't care less to think for themselves.

The story is posted on the homepage as a spotlight story. It's been there for over an hour. The link is here : http://www.naharnet.com/stories/en/8347-pro-assad-syrians-rally-in-damascus-as-global-outcry-grows

Anonym, regarding your comment on "sheep" and "biased reporting", you must be mistaking Naharnet for other lebanese media you most probably follow.

Naharnet is the only truly "independent" Lebanese media that offers only factual reporting, no opinions, no analysis, no salt and pepper !

It's the only media that is "self-sustainable" with not a single cent of political funding, no ties to any politician or political party !

We consider ourselves to be the least biased media in the country and I challenge you to prove otherwise. Unfortunately, to the eyes of some biased readers, Naharnet will always appear as biased but what can you do !

Our role is to filter through all the bits and pieces of information that we receive and decide what makes the headlines and what not.

That particular story you are mentioning was published at the right time and is a spotlight story. Maybe you didn't see it, maybe you didn't want to see it ! But it's there!

well first and foremost i appreciate the fact you did reply professionally to my comment, I do not have any specific biased point of view towards either political sides in this country i try to judge things as fairly as possible myself, i am neither a supporter of one side nor the other, however I would like to point out the following before this is closed:

1- I have, in the past, read some biased reporting on your pages , perhaps this is a point of view perhaps not, perhaps things have started to change in your hierarchy perhaps not.

2- when i posted my comment the spotlight was clearly not there for a long while or perhaps i was the victim of our beloved internet connection in this country (with the caching of cookies on the servers as they would say , so to speak in technical terms), or else why would i write what i wrote.

in any case, I wish for the best in the future.

Thank you for your reply. It happens that the tone of some articles seem more or less biased. It has certainly happened with us in the past and will certainly happen in the future.

We have a team of journalist from all political backgrounds, with clear instructions to stay away from analysis and opinions. You may find hints of biasedness in their wording but this doesn't happen very often.

Also note that some articles are sourced from newswires like AFP / AP and are not produced by Naharnet.

My last point is regarding "Caching" which makes website faster for users. Our homepage is generated every 5-10 minutes rather than everytime it is requested. This enables us to improve the speed of our service.

We respect the opinions of any of our readers and take criticism very well. We make it our duty to answer each comment, good or bad, publicly (when noticed). We don't censure or remove them (unless they are SPAM or ABUSIVE).

Thank you for your comments and best regards!