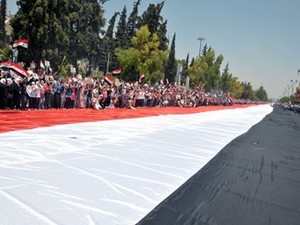 Thousands of supporters of Bashar Assad demonstrated Wednesday on the outskirts of Damascus as the embattled president came under intense world pressure to halt a crackdown on democracy protests.

This show of support came as a global outcry grew over a three-month crackdown on protests by Assad's regime, with the death toll mounting and tanks deploying in the restive northeast near the Iraqi border.

Traditional Syrian ally Turkey made renewed calls for a halt to the crackdown and Prime Minister Recep Tayyip Erdogan was to hold talks Wednesday with a Syrian envoy.

Syrian Human rights activists said security forces were continuing to sweep through villages and towns near the flashpoint town of Jisr al-Shughur, in Idlib province, forcing refugees to flee across the border with Turkey.

Witnesses said security forces were preventing residents from leaving Idlib province, and reported they were shooting at people who attempted to elude military checkpoints.

Protesters have described the operation in the northern mountains as a scorched-earth campaign, while Syrian soldiers who deserted to Turkey have alleged they were forced to commit atrocities there.

According to a toll released Tuesday by the Syrian Observatory for Human Rights, the violence has claimed the lives of 1,297 civilians and 340 security force members in Syria since the unrest erupted mid-March.

"We support Syrian citizens who aspire to freedom and a better life based on democracy and respect for human rights, and we condemn the Baathist regime, its savage repression and its crimes against humanity against peaceful demonstrators and the Syrian people," a statement said.

Washington on Tuesday accused Iran of backing Syria's assaults on pro-democracy protesters and again said Assad must step down unless he can lead a transition.

"Iran is supporting the Assad regime’s vicious assaults on peaceful protesters and military actions against its own cities," Secretary of State Hillary Clinton said.

The Turkish premier was due to host afternoon talks Wednesday with Assad's envoy Hassan Turkmani in Ankara to discuss the developments in Syria, a Turkish government source told Agence France Presse.

On Tuesday Erdogan telephoned Assad calling for an end to the unrest and a timetable for reforms, Anatolia news agency said.

Erdogan has traditionally enjoyed good relations with Assad but he has been increasingly critical of the repression across the border and last week accused Syria of committing an "atrocity."

Thousands of Syrians have crossed over into Turkey in recent days, many of them fleeing a major army operation in the town of Jisr al-Shughur, roughly 40 kilometers from the border.

Turkish Foreign Minister Ahmet Davutoglu was due to travel to the Hatay region on Wednesday to inspect reception facilities for the refugees and meet with Syrians crossing the border, Anatolia reported.

Davutoglu will also host a meeting on Thursday with Turkey's ambassadors in Arab capitals to discuss the Syrian crisis and the impact of the pro-democracy uprisings across the Middle East and North Africa.

Hollywood superstar Jolie -- a goodwill ambassador for the United Nations refugees’ agency (UNHCR) -- has asked to visit refugee camps in Turkey and Ankara is "considering the request," a government source in Turkey said.

"There is no water, no food, children cry all the time," one woman who had fled Jisr al-Shughur over the mountains into Turkey told AFP.

"May God punish him! He even poisoned our water. What have we done to him?"

At the United Nations, European powers campaigning for a draft resolution condemning the crackdown face opposition from Russia and China, both of whom wield veto powers and object to U.N. action against Assad.

Syria blames what it says are foreign-backed "armed terrorist gangs" for the unrest. It says troops launched operations in Jisr al-Shughur at the request of residents and after 120 policemen were massacred there.

No one could deny that many in Syria still love even worship Assad. As in Libya and in Yemen the dictators have their clans and tribes as well as those who have built their lives around the exploitation of their power.

Even if Assad, by coercion or intimidation, could get a million people to go to the streets this does not give him the right to oppress the rest of the Syrians!

The world can take their outcry and shove it up their... wazoo. Afterwards, let's hear about their outcry over Bahrain, Saudi Arabia, Morocco, Algeria, Jordan....

I bet they used charmin single ply. must be. 2.3k!

Never understood why Aoun or Jumblat had any followers until I realized Khadafi and Assad still have supporters. These followers are typically weak minded individuals without the capability of critical thinking but are impressed by the aura of power, even if this power is based on brutality and oppression.

Time for a new Syria

What a coincidence, the number of demonstrators in support of the Tyrant is about the same and the number of Mukhabarat's agents in Damascus... No wonder eager for a pay raise.