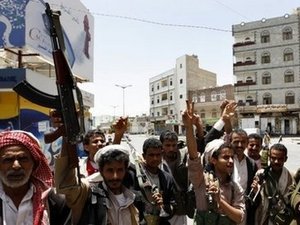 "The authorities have discovered transactions made through Qatar and the mediator in this is our former ambassador (in Cairo) Abdulwali al-Shumeiri," deputy information minister Abdo al-Janadi told reporters.

"We call onto Qatar... to stop financially supporting rifts inside Yemen's army and to work instead on (backing) the country's security and stability," said Janadi.

Rifts have surfaced within Yemen's army as the country surged deeper into a months-long political turmoil with commanders of main army divisions in the capital Sanaa and the second-largest city Taez announced their defections.

Gas-rich Qatar's role now "is neither in its benefit nor in the benefit of other countries across the region," he added.

Embattled President Ali Abdullah Saleh, who is recovering in Saudi Arabia from wounds sustained in a blast that hit his presidential palace in Sanaa, accused Qatar in April of a "conspiracy" against his country.

He also accused it of "funding chaos" throughout several Arab countries rocked by a wave of protests that have toppled regimes in Tunisia and Egypt, inspiring similar uprising in other countries including Yemen.

At least 200 protesters have been killed in Yemen in five months of protests demanding the ouster of Saleh, who has been in office since 1978.