Assad Stresses He Will Not Step Down, Denies Using Chemical Weapons 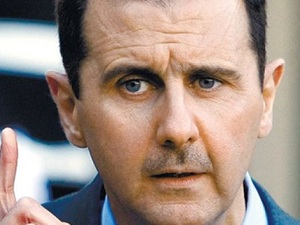 Syrian President Bashar Assad said Saturday he welcomed a U.S.-Russian peace initiative to end Syria's civil war but had no plans to resign, in an interview with an Argentine newspaper.

"To resign would be to flee," he told the Clarin when asked if he would consider stepping aside as called for by U.S. Secretary of State John Kerry.

Assad spoke to Clarin and the Argentine state news agency Telam in a lengthy interview in Damascus in which he also denied that his government has used chemical weapons against the civilian population.

His comments come amid a rare joint push by the United States and Russia to convene a peace conference in Geneva that would bring together members of the regime and the rebels fighting to oust Assad.

"We have received the Russian-U.S. approach well and we hope that there will be an international conference to help Syrians overcome the crisis," Clarin quoted Assad as saying.

He added, however, that "we do not believe that many Western countries really want a solution in Syria. And we don't think that the forces that support the terrorists want a solution to the crisis.

"We must be clear," he said. "There is confusion in the world over a political solution and terrorism. They think that a political conference will stop terrorism on the ground. This is unrealistic."

Pressure for action on Syria has mounted with Western intelligence reports that the regime has used chemical weapons on at least two occasions and a death toll nearing 95,000 after 26 months of war, according to a Syrian observer group.

Telam quoted Assad as denying that his government has used chemical weapons against its civilian population, saying that mass casualties could not be hidden if the regime had.

"The accusations against Syria regarding the use of chemical weapons or my resignation change every day. And it is likely that this is used as a prelude to a war against our country," he said.

"They said we use chemical weapons against residential areas. If they were used in a city or a suburb with only 10 or 20 victims, would that be credible?"

Their use, he said, "would mean the death of thousands or tens of thousands of people in a matter of minutes. Who could hide something like that?"

Assad also questioned the estimates of the number of dead produced by human rights groups, but acknowledged that "thousands of Syrians have died."

"We shouldn't ignore that many of the dead that they talk about are foreigners who have come to kill the Syrian people," he said, blaming "local terrorism and that coming from abroad" for the violence.

Clarin said Assad denied that his government was using "fighters from outside of Syria, of other nationalities, and needs no support from any Arab or foreign state.

"There are Hizbullah people in Iran, in Syria, but they come and go in Syria from long before the crisis," he said.

The giraff will leave, but the rebels are looking for a coffin long enough to accommodate his uncommon proportions. Asma should join him as well as she's too busy shopping for prada shoes and bags online. In the mean time, people are dying by the hundred every day.

The history will record this madman as the Hitler of the 21st century and Obama as the weak president that started the demise of the US global influence.

I am ashamed that I ever voted for Obama and thought this man has a conscious.

There is no country on earth who has invaded and occupied more countries on earth and slaughtered more civilians than the blood thirsty US empire since Adolf Hitler. Assad is small compared to the blood thirsty American empire on the way DOWN.

Who invented the internet? You people talk like there were no history or inventions that laid the ground for our modern inventions, BEFORE US even existed....
We can start counting where US slaughtered by discussing how many Indians are left in their homelands?

Hey idiot. Former Dictator Rious Mont has just been charged with GENOCIDE! Do you know who helped him? Do you know that Reagan called him a "friend to Democracy". America has supported the worst dictators in history...from Pinochet to the Saddam Hussein. Are you that stupid to think America invaded Dominican Republic, Vietnam, Iraq, and many others for "democracy".

By the way, Rios Mont was the dictator of the country of Guatemala...ignorant (formerlebaniz) American like you would not know that. If most Americans were not so ignorant, they would be "formeramericans".

In Vietnam the US slaughtered 1 million civilians, In Iraq and Afghanistan 300,000 civilians both according to western estimates. The natives were not allowed to prosecute American War criminals and most were not NEVER punished.

Your propaganda works for ignorant Americans who can not locate their state on the map....not in the middle east. And you are going to tell me that the native Americans were not victims of genocide by the Europeans invaders....they just decided to commit mass suicides for 3 centuries.

Strider all I can see in your post is Swearing. Doesnt seem like the words coming out from a productive, educated and hard working citizen...

I totally agree with you josh. Those salafist/wahabist savages.

Regarding the civilians killed in Iraq also have you forgotten the suicide bombs and car bombs that are happening daily and continuing now in Iraq or is that something we conveniently forget again to serve your narrative?

No, not ALL the American global involvement have been righteous nor is the US and the US politics the pure form of GOOD, but it certainly is daylight compared to the USSR/Russian/Iranian/North Korean/Syrian/Al-Qaeda and all other forces out there, or do we conveniently forget again to color the US as the prime evil?

One more thing to add John, I'm glad you are keeping records and EVEN if you think in your head that the US did mistakes in the past that does not mean or justifies the killing of more innocent civilians to keep your ruthless dictator in power.

I never said that I was living in Syria...he is not my dictator. I never said that he was not a ruthless dictator... I was responding to your statement that makes America sound like a moral country, which is worse than the Syrian government.

I said America has slaughtered the most since WWII. I did not say everyone else have been saints. You are asking me to read the American wikipedia? This is like asking the victims of Nazism to read Nazi propaganda. No aggressor is going to call himself the aggressor. Colonialists and imperialists are not going to tell you the truth because they will go bankrupt paying for raperations.

Formerlebaniz. You are partly right but don´t forget whomem created the Talibans from hell to start with. Yes, US through Bin Laden in order to fight the Sovjet. Had not the US supported them, they would never have risen to power..

I'm a Christian and I have friends from all religious backgrounds and i cannot believe the administrator allowed such a stupid comment from josh to be posted. Josh, do not talk on behalf of Christian and Allawites, you're an embarrassment to your religion and the human race. And I remind the administrator to filter out racist comments like Joshe's in future.

When and if Bashar faces a trial for crimes against humanity, his lawyers best defense will be insanity. They will have plenty of evidence to back up their claim.

Good one- except I do not think all of the people who have it out for him will be sympathetic.

Former, you asked when has the US ever slaughtered civilians and you got your answer, no point in trying to whitewash their crimes with nonsence. When the US send drones that kill civilians at weddings, or at home including MANY kids, then yes the US is slaughtering civilians so please stop beating around the bush. When they kill japanese with a nuclear bomb they are slaughtering civilians. When they raped iraqi women and massacred thousands upon thousands, they are slaughtering civilians. Nobody said there arent others in those countries who also do the same but your specific question was about the US. Trying to be more catholic than the pope due to an inferiority complex only makes one seem pathetic.

Assad ha learned how to lie from the Iranians-- they are experts at it and think that people are stupid enough to believe them. I hope they get blown off this planet by either Israel or the US.

Its funny how Assads tone has changed, it used to be that there were no issues withen Syria, then it became some rebel were voicing cocnerns that were non Syrian. Soon after his rhetoric became there is no dealing with the terrorist and to the now we will meet with them over the table in Geneve to save Syria. Im guessing somewhere along the line Clown may admit there could be a misunderstandment in Syria looool.