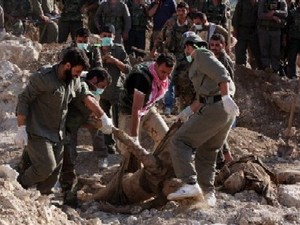 The remains, which lay under a pile of rubbish, had been placed in yellow and orange body bags, an Agence France Presse reporter, who was taken to the site by government minders alongside 20 other journalists, witnessed.

Bulldozers surrounded what state television had identified earlier as "a new mass grave," unearthed after the army took control of the town on Sunday.

According to the latest official media reports the grave contains the bodies of security forces killed "by armed terrorist groups in Jisr al-Shughour."

Members of the press were introduced to a man who identified himself as a "gunman who participated in a massacre at police headquarters" and said the victims were killed by "armed men" on June 6.

The discovery of the alleged mass grave comes 10 days after authorities reported the massacre of 120 policemen by armed gangs in the flashpoint town.

Jisr al-Shughour has been the focus of military operations since Friday.

Syrian troops seized the town on Sunday after battling with "armed gangs" in Jisr al-Shughour and "purging" the state hospital of armed groups, state television reported.

The official SANA news agency reported on Sunday that a mass grave containing the bodies of security agents had been found in Jisr al-Shughour.

"Armed groups had mutilated the corpses which were removed from the mass grave," SANA added, without specifying the number of bodies found.

Human rights activists say those killed are unarmed protesters and deny a massacre in Jisr al-Shughour, saying bloodshed erupted during a mutiny by soldiers who refused to fire on the town's residents.