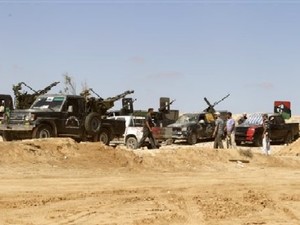 Libyan rebels have captured three western villages on the road to Tripoli, as NATO insisted it could complete its mission without putting soldiers on the ground against strongman Moammar Gadhafi.

The Western military alliance which has carried out 10 weeks of air strikes against Gadhafi's forces can see out its mission without ground troops, its operations commander said in a briefing on an Italian aircraft carrier.

Lieutenant General Charles Bouchard also said that the military situation in western Libya, where there has been an upsurge in fighting between regime loyalists and rebel forces, was developing "very positively."

Senior military officials from Britain and France, key players in the NATO campaign, have expressed concerns about how to maintain the NATO operation, which has been extended for a second three-month period from June 27.

Libyan state television said that a NATO strike on a bus in the town of Kikla, near Yefren, on Wednesday had killed 12 of its passengers. There was no immediate word from the alliance on the report.

Anti-Gadhafi rebels, meanwhile, seized three villages as they sought control of a key junction connecting the towns of Yefren and Zintan, west of Tripoli, an Agence France Presse correspondent reported.

Rebels were seen patrolling the streets of Zawit Bagoul, 20 kilometers from Zintan. Pro-Gadhafi positions on the outskirts of Zawit Bagoul were deserted and loyalists left behind clothes, shoes and ammunition.

The correspondent said the rebels later also moved into Lawania, about seven kilometers away, and then Ghanymma, less than 10 kilometers from Yefren, as NATO aircraft were heard overhead.

Libyan authorities organized a visit Wednesday for Tripoli-based foreign journalists to Gharyan, 100 kilometers south of the capital and 30 kilometers from hotly-disputed Yefren, to show the situation in the town was calm.

Anti-regime graffiti on the walls had been painted over and activity in Gharyan appeared normal.

In its latest operational update, NATO said it struck several targets including a truck-mounted gun near Yefren on Tuesday.

Ahead of talks with NATO Secretary General Anders Fogh Rasmussen, British Prime Minister David Cameron insisted that Britain could sustain its Libya operation long-term, after its navy chief warned of tough choices if the campaign lasts more than six months.

The premier said he had met First Sea Lord Admiral Mark Stanhope, the head of the Royal Navy, following his comments.

"I had a meeting with the first sea lord yesterday and he agreed that we can sustain this mission for as long as we need to," he said.

Following a three-day pause in NATO strikes on Tripoli, powerful explosions rocked the Libyan capital late on Tuesday, with black smoke rising from a site close to downtown.

In its operational update, NATO said Wednesday it had also struck an air defense support facility in Tripoli and two surface-to-air missile launchers nearby.

South Africa's foreign minister prepared a speech accusing NATO of deliberately targeting Moammar Gadhafi in its Libya air strikes, but did not make the comments to the U.N. Security Council on Wednesday, diplomats said.

South African Foreign Minister Maite Nkoana-Mashabane had been expected to give a thinly veiled warning to the U.N. Security Council that the air strikes in Libya were harming efforts to agree a Western-drafted resolution on Syria's crackdown on protests.

The South African government has repeatedly accused NATO of exceeding its U.N. mandate to protect civilians.

In Washington, a bipartisan group of U.S. lawmakers sought to throw a roadblock in front of President Barack Obama's Libya policy, filing a lawsuit that charges that U.S. military operations are unconstitutional.

Anti-war Democratic Representative Dennis Kucinich and nine other members of the House signed the lawsuit challenging the Obama administration's circumvention of Congress in authorizing use of military force in a protracted campaign.

"With regard to the war in Libya, we believe that the law was violated. We have asked the courts to move to protect the American people from the results of these illegal policies," Kucinich said.

The White House later delivered a report to Congress that it said justifies its role in the Libya conflict and insisting that Obama did not exceed his powers in ordering the action.

Officials said the 30-page report details the U.S. role in the mission to protect civilians and attack Gadhafi's forces and contained a detailed legal analysis showing the action is permitted under U.S. law.

It also said the United States has spent more than $715 million for military and humanitarian operations in Libya since unrest began in the North African country earlier this year.