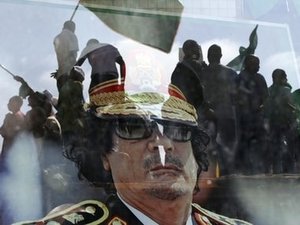 "Elections, immediately and with international supervision. It's the only painless way to break out of the impasse in Libya," Saif al-Islam told the daily Corriere della Sera correspondent in Tripoli.

"We could hold them within three months. At most by the end of the year. And the guarantee of transparency could be the presence of international observers," said the 68-year old Gadhafi's eldest son and possible successor.

Saif al-Islam said the elections could be supervised by the European Union or African Union, the United Nations or even NATO as long as a "mechanism" was put in place to ensure there were "no suspicions of vote rigging."

"Let's go to the polls, and may the best man win," he told the reporter, who had turned up at the Radisson Blu hotel in Tripoli for an interview with the Foreign Minister Abdelati al-Obeidi, but had found Saif al-Islam there instead.