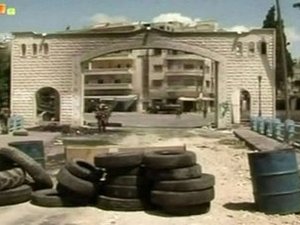 The Syrian army has stationed tanks at entrances to Khan Sheikhun in Idlib province and troops have begun to enter the northwest town, a rights activist said on Thursday.

"Dozens of tanks, armored cars, personnel carriers and army trucks have been deployed at entrance points to Khan Sheikhun, and soldiers have started going in" to the town north of Hama, said Rami Abdel Rahman, head of the London-based Syrian Observatory for Human Rights, reached by telephone.

He added that the military had also cut the road between Aleppo and the capital Damascus by erecting barricades.

On June 5, "two tanks of the Syrian army were burned by the residents of Khan Sheikhun," an activist told Agence France Presse on condition of anonymity.

The reinforcements were sent as part of a campaign by the regime in Idlib province 330 kilometers north of Damascus, where the army is continuing to comb Ariha and Maaret al-Numan near the flashpoint town of Jisr al-Shughur, an activist said.

On Wednesday near Jisr al-Shughur, officials showed journalists a grave containing at least five corpses they said were security forces.

Elsewhere, anti-regime protests were reported overnight in the Mezze district of Damascus and at Harasta, Jisrin and Saqba on its outskirts, as well as at Zabadani some 50 kilometers from the capital.

Abdel Rahman said thousands of people also protested in Hama, 210 kilometers from Damascus, and in other regions.

All fundamentalist and terrorist Sunnis, Salafis and Wahhabis must be pursued to the end of the earth and terminated. The more tanks, the merrier. Go get them, Lion.

Umberto is correct but we should also follow that with the destruction and eviction of the Byzantine imported Crusader Christians and send them back from whence they came as Sayyed Hassan promised. The PLO, the Leftists, Amal, Mouratitoon, Arab nationalists, then the magnificent Syrian army started doing that but they stopped, now is the time to finish the job for good. As the Ayatollah predicted a couple of month ago the Islamic Middle East is awakening and with the support of the leaders in the Iranian Islamic republic and it`s branch the Islamic resistance in Lebanon we will create a new Islamic Middle East.

syria 20% christian and we will not let what happens to us in ,

sudan, egypt, or iraq happen to us in syria,

so come try to remove the cross from our necks , we will butcher all of you......

Resistance4eva u big dope im hoping for the day all u nut jobs decide to form an army and try and fight the west,so they can drop bombs on your head,that's right you all tired to kill the Christians in Lebanon that's why now all those filthy dirty Palestinians are cursed from God and now Syria and rest of the middle east, its not a awakening its there destruction!Arabs are already 1000 years behind and they are only making themselves even more backwards lol shows how smart you really are.

actually Mansour I like the Palestinians the only people Cursed by Gods are the coward Lebanese Maronite who ran to France, Australia, or into Israel after their acts of Treason.....and Talks sh!t from their garbage Burger Stand,

Orthodox thank you for your support, I like Jesus and Assad in the same sentence comrade, they belong together! You obviously belong to the reformed Orthodox church, the very reformed Orthodox church, the atheists Qawmi church. Good for you my friend because as Sayyed Hassan said the Christians of the Levant were imported by the Orthodox Byzantine empire so they were also Orthodox but you are a reformed atheist one so you can stay. Besides the magnificent president Ahmadinejad promised from South Lebanon that Jesus will follow the Imam al-Hussein into battle against the Zionist. Everyone knows that Jesus loves spilling infidel blood as much as the Imam Hussein and that the Imam Hussein is a great leader and Jesus should feel privileged to follow him and be one of his disciples.

mansour should be banned for writing such racism. Mansour, stay in australia bcuz ur not welcomed in lebanon u accursed child of satan. Hope u enjoy your arab name that your arab parents named you with hahaha.

Mansour + Resistance + Orthodox are the same complexed person and the same garbage .