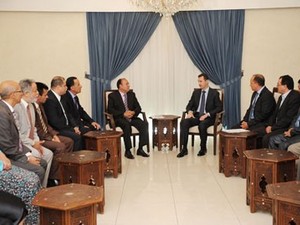 President Bashar Assad told a Tunisian delegation on Thursday he was determined to crush the rebellion against his regime and to find a political solution to the crisis in Syria, SANA news agency reported.

"Syria is determined to tackle terrorism and those who support it regionally and globally, and to find a political solution to the crisis," Assad was quoted as telling the delegation, the official agency said.

Assad also said that the "Syrians appreciate the positions of Tunisian people and are aware that some Tunisians came to fight in Syria, but they represent only themselves."

Tunisian Foreign Minister Othmane Jarandi estimated 10 days ago that some 800 Tunisians were fighting alongside Islamist rebels against the regime in strife-torn Syria.

Well here is some evidence Assad can use: 1.5 minutes, well worth the watch ...

@ mckinl
Normally I do not respond to posts such as yours but this one with the purported You Tube claim that General Clark revealed US plans, etc. is os out of context and deceiving that it could not be ignored.
This is a 2007 interview with General Clark (six -6- years ago folks) and he was ridiculing the Bush administration actions of 2001 !!
Come one, you know better than to spread untruths like this.

It is all there to see ... they had to change their plans a little because they botched Iraq so badly. After Iraq it became a game of damage control as the Shiia took power and cozied up to Iran.

Libya was unexpected and even then the US was reluctant and as we see for good reason with the state of Libya today ... The US knows that Syria will be even worse than Iraq or Libya.

The US has long range plans for its foreign policy lebnanfirst. Obama tried to carry these out but Bush screwed up Iraq so badly it just couldn't be done. Believe me these plans were on the table.

well let him start by himself as we Lebanese bear witness of his terrorism over some 30 years.

just as planned from the start: let the situation rot, let extremists in, let chaos and we can play the victims....then ask for the help of iran and hezbis so it is justified and no one will dare say a thing lol....