Assad Says to Run in 2014 Poll if People Want, Hizbullah Fighting in Qusayr Only 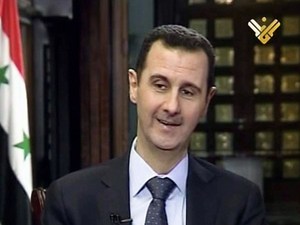 Syrian President Bashar Assad said on Thursday that he would run in the 2014 presidential poll if that is the desire of the Syrian people, noting that Hizbullah is only fighting in the town of Qusayr, not entire Syria.

"The main battle is in Damascus and Aleppo, not in Qusayr, and Hizbullah has a limited number of fighters, even if they numbered 2,000, but we're speaking of a war involving thousands of fighters," Assad said in an interview with al-Manar television.

"The course of the battles does not indicate that someone is seeking partitioning," Assad added.

He noted that the timing of the Qusayr battle is linked to the “Israeli escalation, because the objective is to besiege the resistance by land and sea.”

“Some of Israel's agents in Lebanon tried on May 7 (2008) to seize control of the resistance's telecommunications network, forcing the resistance to exist in Beirut, and Hizbullah is now in Syria because Israel is involved,” Assad clarified.

The military support of Hizbullah has helped Syrian regime forces gain the upper hand in the battle for control of Qusayr, a key town for both the regime and the insurgents, where a fierce army assault began 12 days ago.

But the offensive on the mostly-Sunni town of Qusayr forced the movement to change its argument.

"Syria is the rear guard of the resistance (Hizbullah's fight with Israel), its backbone, and the resistance cannot stay with its arms folded when its rear guard is exposed," Nasrallah said on Saturday in a speech for the 13th anniversary of Israel's withdrawal from Lebanon.

Nasrallah stressed that Hizbullah will win the battle against the “United States, Israel and the Takfiris just like it emerged victorious in previous wars.”

Slamming perceived interference in his country by Hizbullah's rivals, Assad said: "Lebanon contributed to the Syrian crisis and if fire is raging in my neighbor's house, it will spread into my house."

Asked about the recent Israeli strikes on Syria, Assad said: "We have informed all foreign parties that we will retaliate against any future Israeli attack, although we directly responded in the past."

He noted that there is "popular pressure" to open a military front against Israel on the Golan Heights, which the Jewish state has occupied since 1967.

"There is clear popular pressure to open a new front of resistance in the Golan," Assad said, adding that "there are several factors, including repeated Israeli aggression."

He said he is "very confident" his troops will prevail over rebel forces in Syria's bloody civil war which has raged since March 2011.

"There is a world war being waged against Syria and the policy of (anti-Israeli) resistance ... (but) we are very confident of victory," Assad said.

He declared that he will run in the leadership election scheduled for 2014 if the Syrian people want him to contest the polls.

"This question will be decided at the given moment. If I feel there is any need for my candidacy, and that will be decided after consulting the people, I will not hesitate to stand," the embattled leader told al-Manar.

Asked about the promised delivery of the Russian S-300 surface-to-air missiles, Assad replied: "All the agreements with Russia will be honored and some already have been recently."

Israel's defense chief, Moshe Yaalon, said earlier this week that Russia's plan to supply Syria with the weapons is a threat and that Israel was prepared to use force to stop the delivery.

“Russia is committed to implementing the weapons contracts it had signed with us and the crisis or (Israeli Prime Minister Benjamin) Netanyahu have nothing to do with that. The delivery of some weapons has been completed and the rest will be delivered later,” said Assad.

Turning to the issue of the proposed peace conference, Assad said: “I have not read (Syrian National Coalition member Moaz) Khatib's initiative and I'm not sure that it is his own initiative, but I want to thank them because I learned that they have given me 20 days to leave together with 500 people.”

“We will go to the Geneva conference as legitimate representatives of the Syrian people and we will return to Syria, but they will return to their hotels,” Assad said of the opposition in exile.

He said the regime's precondition is that “anything we agree on will be put to a referendum.”

“The Arab countries that are backing the terrorists have not changed and Turkey has not changed, but let us be clear, we do not pin our hopes on the Arab League,” said Assad.

This hijo de p... must go. May Allah punish him and hizballa and everyone that has blood on his hands for keeping this ASSad in power.

I can't stop laughing at his reasoning

Funny as hell. He must think people are imbeciles!

lol... just came to elmanar to reassure his hezbi sheep that everything is under control... already heard that a year ago, no? LOL...

where was this interview, Al Manar or syrian TV--makes no difference, they broadcast the same propoganda.

Anyhow, a question for those who say that syria is a "democracy": how can an ASSad be in power for 40 years? Look around at the actual democracies around the world and tell me how many families hang on to power for 40+ years.

tsk tsk tsk.... for M8ers he is a democrat and takes care of his people who support him but kaddhafi was an evil dictator... go figure their standards! LOL they support someone according to their interests ...

Inshalllah syria and the hezb slaughter anyone who threatens the rightous only 3 countries who havent sold out to the zionist iran syria and russia, its sad to see that most people who comment here are anti assad and hezb if only use knew how syria would be if it gets taken over by the rebels anyone know? Well it
Will be another iraq invaded by the US and another arab country owned by the zionist regime, one step closer to iran. Would use be happy then I think use will because your with the opposition

lol didn t know the salafis you are frightening everybody with were zionists now.... how incoherent bashar people are....

Hizb what? they are nothing but terrorist militia that has no reason to have arms. Any Shiite that speaks against them is an Israeli spy, and if it was a politician they assassinate him or her. And now under the orders of Iran they are massacring Syrians.

“Some of Israel's agents in Lebanon tried on May 7 (2008) to seize control of the resistance's telecommunications network, forcing the resistance to exist in Beirut, and Hizbullah is now in Syria because Israel is involved,” Assad clarified............
The SIarel's agents he refers to are of course the M-14 camp who represent better than half of the Lebanese. The Lebanese maybe classified as: M-14 who profess loyalty to Lebanon first (but get accused of being Israel's agents by the Syrian regime and M8). M8 who profess first loyalty to Syria and Iran (no accusation needed), and the M-Lebanese who are not part of M-14 or M-8 (independents) whose loyalty to Lebanon is evident but are a small and not influential group, and the Salafists/whabis whose loyalty is to the Umma. This is my analysis and segmentation of the Lebanese camps. Did I forget anyone?

What does this mean that "ASSad" will run in 2014? Are you people out of your minds? Have you not read the prominent Lebanese NostraDamsels who have been incessantly predicting that the "ASSad" regime has fallen every single week since 2005 and still? Let me remind all of you amateurs that among these Nostras i name the biggies: NostraDrArreet7akeh, NostraBenzona, NostraPeace, NostraPrimeSuspect, NostraGabbyMarch14, NostraAllouchti, the newcomer NostraHarrier and last but not least, NostraPotatoNadimGemayel, aka momma's ladyboy. You go, Nostras.

“Some of Israel's agents in Lebanon tried on May 7 (2008) to seize control of the resistance's telecommunications network"... same vile talk coming out of the mouth of another vile snake. The Thug talks as if his henchmen have a divine right to rule over Lebanon. Drop dead you miserable butcher!

Could take weeks, months or even a few years.. But this criminal will end up just like Gaddafi

looks like Bobby Boucher in this pic. hope he has a better IQ!

Keep on running Forrest Gump, again in 2020 from now! You are so popular. Arab Hitler!