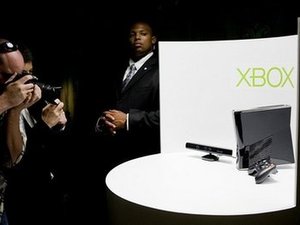 Microsoft on Thursday began letting software developers imbue computers with voice and motion-sensing technology from its Kinect controller for the Xbox 360 videogame console.

"We are looking at taking the Kinect out of the game space a bit and putting it in other spaces," said Halimat Alabi, a developer who attended a 24-hour Kinect coding marathon at Microsoft's headquarters in Redmond, Washington.

Microsoft last week added YouTube, voice commands, television shows and more to Xbox 360 with Kinect as the hot-selling videogame console matures into an entertainment center for all.

Microsoft ramped up voice capabilities in Kinect to allow Xbox users not only to give commands to in-game characters but to speak Bing searches for games, movies, television shows, music and other entertainment content.

Microsoft has sold more than 10 million of the gesture-sensing Kinect accessories for the Xbox 360 worldwide since they hit the market in November of last year.

New "body scan" software will let people take their own pictures using Kinect cameras and then convert the images into on-screen or even in-game animated characters, or avatars, with their features and clothing.

Microsoft has expressed a vision of Kinect moving beyond the living room to medical centers, schools and other places where technology to track skeletal movement and recognize voices could be useful.