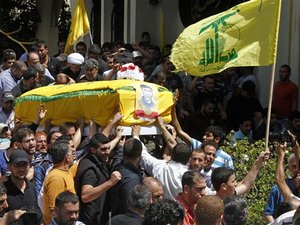 The White House on Tuesday condemned Hizbullah's involvement in Syria's war, expressing that the party's leader Sayyed Hasan Nasrallah is “playing a dangerous game,” as the Free Syrian Army threatened to move the battle to Lebanon.

"We are deeply concerned by the continued fighting in (the Syrian border town of) al-Qusayr and condemn the indiscriminate killing of civilians by Assad's forces and his proxies, including Hizbullah fighters," White House spokesman Jay Carney said.

Carney raised disquiet about the recent spillover of violence into Lebanon, which he said could spark risks of regional instability.

“Nasrallah is playing a dangerous game by sending fighters to support Assad in Syria,” the spokesman remarked.

He elaborated: "Hasan Nasrallah is risking Lebanon's stability and the security of the Lebanese people in order to preserve Assad's rule.”

Carney reiterated the United States' support for Lebanon's policy of dissociation from the conflict in Syria.

“We urge all parties to avoid actions that will involve the Lebanese people in the conflict.”

Meanwhile, the Washington-based al-Hurra television station announced on Tuesday that the FSA informed the United Nations that it plans on moving the fight against Hizbullah from Syria to Lebanon “if the party does not stop its invasion of Syrian territories.”

Al-Arabiya television had reported earlier that the party on Tuesday held funerals for four fighters who died in Syria's battles.

The military support of Hizbullah has helped Syrian regime forces gain the upper hand in the battle for control of Qusayr, a key town for both the regime and the insurgents, where an army assault began last month, amid a Lebanese, regional and international outcry.

Nasrallah had previously justified the group's involvement in Syria by saying they were defending Lebanese-inhabited border villages inside Syria and Shiite holy sites.

But during a May 25 speech marking the 13th anniversary of Israel's military withdrawal from Lebanon, Nasrallah said the Takfiris are the “most prevailing group in the Syrian opposition,” warning against a defeat against them in the ongoing war in Syria.

He said: “If Syria falls in the hands of the Takfiris and the United States, the resistance will become under a siege and Israel will enter Lebanon. If Syria falls, the Palestinian cause will be lost.”

ya FT fi relative stability bi lebnein. Things could be much much worse. Lebanese should regroup, think about their country instead of doing the wars of others. HA is doing very wrong to the lebanese and especially to the chiites to manufacture new ennemies for them from scratch.

Nasrallah will have Lebanon destroyed. Frankly, it would be FSA's right to retaliate against us. Us, Lebanese.... Shame shame shame on the terrorist Hassin. The sooner he gets dead, the better for humanity and Lebanon in the first place.

Ya clueless.... Tel Aviv is struggling as much as Lebanon. Actually, Israel is hit as hard as Greece but they don't make a fuss about it because they don't belong in the EU.

Israel rules through oppression, should they have no one to oppose them and «threaten» them, they'd lose their legitimacy and their model would crumble.....

Has Lebanon already crossed the point of no return for Lebanon to be engulfed in war soon, or does the Hizb still need to kill a few dozen women and children more in Syria for us to get there?

the problem is not nasrallahs, the problem is tafiri Especially targeted for genocide are ­Syria’s Christians, who include the last small enclave speaking Aramaic, the ­language of Christ. Rebel jihadists have sacked Christian churches; photographic evidence shows a militiaman dressed in looted priestly vestments, resembling a scene from Spain in 1936. The Brigade of Islam, a Wahhabi group, killed Christians in Damascus during the rebels’ occupation of the capital. In the town of Qusayr, the last remaining Christian inhabitants out of 10,000 formerly resident have fled. In April, 50,000 Christians were expelled from Homs.

Down with the FSA-Al Qaeda terrorists!

Absolutely. HA are used to the easier role of being a strong resistance to occupation. They will not do well as a weak occupier against strong resistance. It was a mistake for Assad to allow them to fight with his forces because it will mobilize the largely Sunni, and maybe even Christian, population against a foreign and sectarian force. History has taught us that no matter what FT and his HA compatriots say.

Wow, ten thumbs down FT. Reminds me of seeing some umshahar making a pathetic attempt to catch a ride lol. I guess your FPM propaganda is well recognized and not so well received here. lol.

Maybe you should read Slash' post more carefully. There are different definitions of winning buddy, such as HA's great victory in 2006 lol. Is victory a matter of achieving a military objective - nope. Watch a documentary on Sun Tsu, it's much more than that, plus I know you can barely read.