Putin Says Assad Should Have Gone ahead with Reforms 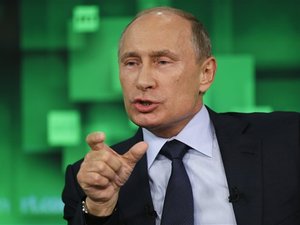 Russian President Vladimir Putin said Tuesday he had always believed that Syrian strongman Bashar Assad should have implemented political reforms that could have averted the current bloodbath.

But Putin also stressed that he remained firmly opposed to outside intervention and implied that Russia's position on the crisis remained unchanged.

The Russian leader told a question-and-answer session held in the studio of RT television -- Moscow's state-run international channel -- that Assad should have listened more closely to opposition demands when the conflict broke out in March 2011.

"I have said that it seemed like the country was ripe for changes and its leadership should have sensed this and begun implementing these changes," Putin said.

"This is apparent. Otherwise, everything that is happening -- it would not have happened."

Putin also denied that Russia was acting as a public defender of Assad by blocking three rounds of U.N. Security Council resolutions sanctioning him for violence that has now claimed more than 94,000 lives.

"We are not the lawyers of the current government or President Bashar Assad," Putin said.

"We do not want to get involved in a conflict raging between different branches of Islam, between the Shiites and the Sunnis."

Russia and the United States on May 7 jointly proposed holding an international peace conference that could get the two warring sides at the negotiating table for the first time.

The prospects of the talks being held in Geneva in the coming weeks have been dimmed by the rebels' refusal to attend any negotiations that are held against the backdrop of their recent heavy losses on the ground.

The rebels' damaging defeats have sparked renewed debate in the United States about the need to funnel arms to the armed opposition.

But Putin said such tactics are misguided because a large section of the rebels are openly allied with al-Qaida and present an enormous danger themselves.

"Certain people watching from the side think that if this entire region is fashioned in a certain manner and branded a democracy, that then everything will be fine," Putin said.

"This is not the case," he stressed.

Zoroastrians are noble people.... Unlike the hizb el zib criminals.

Dude, would you effing stop lopping all Shia together, please? Shia were those who were beaten by Hizb-Allah hoodlums while they were protesting against Shia Iran's support of Shi3i 3alawi Baschar's massacre of innocents in Syria. Shia are those who remember the Hasan and Hussein and remember how they were massacred while they were unarmed, and would not do the same unto unarmed civilians in Syria, be they Sunni or Christian or even Jewish, could it have been the case. Hizb-Allah are no Shiites! They are what the Surat al Fati7a describes as "Al-Dalloun" - the lost ones: they have no purpose of their own; they only take orders; they are killing machines, not humans; most certainly not Shiites. And soon they shall become those "maghdouba 3alayhim" - those against whom God's wrath is focalized. When the Mahdi returns swinging his Zulfiqar left and right, it won't be to kill the Sunni and the Christians and Jews - it would be to purge the scum from Shia's own ranks.

Is this PUTIN guy serious??? he is a Hypocrite is he not doing political assassinations against journalists and does he not clamp down on protesters and freedom of expression... the hard way...

Apply those principles to yourself as well. Listen to your own people and make reforms in Russia. You emboldened this creature to become a mass murderer for not losing your last Russian influence in the Middle East.

bashar el assad was a true hope when he replaced his father because his early speeches showed he wanted to reform syria but the old guards of the baath party living off the privileges granted by his father got the best of him and he had to bend in front of them....

if he implemented the reforms he promised he wouldn't have been in such dire straits....

I agree with you Putin. Also, there should have been reform in Jordan, KSA, Kuwait, Morocco, and a dozen other middle eastern countries.

This is funny. You have 2 persons who only want reform in Syria. Figures!

When the people of Tunisia and Egypt overthrow the Zionist puppet dictators, there were not billions of dollars in salaries and arms sent to the revolutionaries. Are billions of dollars being sent to the people (including heavy weapons) in Bahrain or any other country run by an Arab dictator who is working for Zionist Imperialist America? I do not mind the lousy Syrian regime getting overthrown, but how about all of those worthless hated Arab puppets of Zionist America?

The evil American empire and their worthless oil and Gas Kings think that they can hijack revolutions and with money they can overthrow leaders they do not like and keep puppet dictators under their control in power. Well that ONLY works for a short period, in the long run they LOSE.

By the way, REAL revolutionaries like Che Guevara and his comrades do not need money to overthrow a hated puppet dictator working for Imperialist America and the multi national corporations.

Man..the older I get the less sleep I get. Good Night.

We should send the Mexican drug cartels into Syria and Iran- they will make mincemeat out of Assad and those Islamic clerics in Iran-- they will cut them into pieces and dissolve them in acid.

We already have the worst of the worst, Canibals, Human Organ Eaters in our region. Now thank god for Putin who can see through these Sponsors of Canibals ( GCC/KSA) aka Free Savage Animals / Al Nusra . Full time is not over yet.