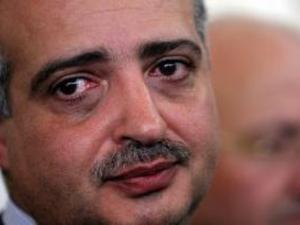 Lebanese Democratic Party leader Talal Arslan’s resignation dispute after the formation of the government is likely to end through the nomination of his brother-in-law Marwan Kheireddine to replace him, al-Liwaa newspaper reported on Monday.

Sources told the newspaper “since the portfolios have been occupied and there’s no chance to replace any minister after being done with the handover ceremonies in all ministries,” Kheireddine is likely to replace Arslan as minister of state.

However, As Safir newspaper reported that the Druze leader’s verbal attack on PM Najib Miqati opened the way for reconsidering Arslan’s resignation.

The MP resigned last Monday hours after the cabinet was announced, accusing Miqati of discriminating against the Druze community and other minority groups.

Arslan remained mum on Sunday during a press conference on whether he would grant his vote of confidence to the new cabinet.

He also apologized for slamming Miqati.

Miqati’s circles welcomed Arslan’s stance. “Recognition of error is a virtue, it’s good that Minister Arslan moved back to the principles of Emir Majid.”

for god sake...this Homosexual (denouced of course) is a major Syrian/Shiite puppet...could we please not post any of the stories relating to this guy/gay....as he cannot possibly be presenting any of the honorable families of the Drouz sect...Thank you.

the only dishonorable is yourself. regardless of whether u agree or disagree with arslan politics.. his being or not being gay is none of your business. keep your bigotry and medieval backward self in the closet where you belong.

I guess it is a mood thingy! Druze leaders are so confused they can't hold tight to any of their political stances. How can we see credibility in anything they stand for. The prime minister is right, we cannot judge what his cabinet say, only what they do.

arslan: mental age 5 yrs old.... poor guy he is crying because he didn t have a piece of cake nor a ministry to steal people's money...