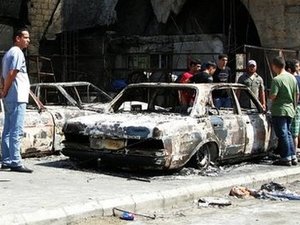 A ministerial-security meeting was held on Monday morning under Prime Minister Najib Miqati to address the situation in the northern city of Tripoli in the aftermath of Friday’s clashes.

Miqati stressed that the security forces are charged with maintaining the peace in all regions without discrimination.

“There are no difference between pro-government and opposition supporters as they are all Lebanese and the state is obligated to protect them,” he added.

A statement after the meeting said that the Prime Minister praised the efforts that helped contain the situation in Tripoli, saying that an investigation must be launched in order to uncover the causes of the unrest.

The army was reportedly forced to withdraw some units from southern Lebanon in order to properly contain the situation in Tripoli.

Charbel told As Safir newspaper in remarks published on Monday that the situation is under the army’s control, revealing that a “major and serious” political decision was taken to prevent an escalation in the violence.

The newspaper added that Miqati held a meeting on Saturday with Rifi and the head of the ISF Intelligence Bureau Wissam al-Hasan, during which he informed them that “security is a red line and the security and military forces should assume their full responsibilities in imposing stability throughout Tripoli.”

"Miqati stressed that the security forces are charged with maintaining the peace in all regions without discrimination.".....! what a ridiculous statement. Yeah, security is applied on those normal citizens who pay taxes, pay electricity bills, and don't carry arms. However, you can be killed, butchered, and arrested by the thugs of the so called resistance and you will never see the army protecting you. Miqati please, stop issuing these dramatic statements. We all know how you came to be named prime minister. I challenge you to close Amal armed offices and contain their thugs!