Geagea: Contacts Ongoing with March 14 to Sets Plans for Next Phase in Lebanon 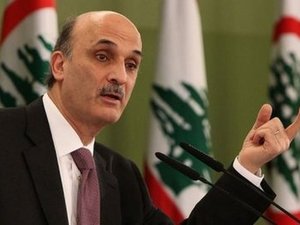 Lebanese Forces leader Samir Geagea called on Monday for the launch of a “serious investigation” into Friday’s clashes in Tripoli “instead of wasting time in laying blame on each other.”

He said before reporters that the final solution to this issue lies in making Tripoli a weapons-free city.

Addressing the formation of the new government, Geagea stated that it is directly connected to the Syrian regime and “it does not reflect Lebanon’s image, which poses a threat to the country.”

The LF leader stressed that contacts are ongoing with the March 14 camp in order to set plans over how to confront the upcoming phase in Lebanon.

On the government’s policy statement, he noted that it should avoid generalities, as it is seeking to do, and instead phrase matters clearly.

why, does Gea Gea reflect our country"s image? He would have to murder 4.000.000 lebanese citizens before that ever happens.. as he killed thousands, he can kill millions. Thank heavens that our ebanese Hitler is confined to his little village in the mountains. Hopefully back to prison, and execution, this way no more presidential pardons possible. Justice has to be served.. the rescinding and annulation of that shameful amnesty given after Taef accord, trying all war lords, and executing those found guilty.. a lesson for their children if they decide to enter lebanese politics. No peace in our country before the likes of Gea Gea are locked up.

The "upcoming phase" for Lebanon will look more like this:
1. With Hezbollah allied personalities in charge of Defense and Internal Security, the US and the West will end foreign assistance programs to both Ministries.
2. Hezbollah's security apparatus will flow into and fill the vacuum left by the atrophied State Institutions.
3. Hezbollah, which has run Lebanon by force from outside of the State Institutions will gain the legitimacy of state institutions, turning Lebanon into a state modeled on the Islamic Republic of Iran.
4. Israel and the US will turn to Syrian Intel and Security forces to reenter Lebanon in order to address the "Hezbollah menance", if Assad survives.
5. Lebanon retrogrades back 25 years from the cusp of full independence, to foreign subservience.
6. Did I mention that 10 Mossad agents were "discovered" in the ranks of Hezbollah, some as officers in Hezbollah.
Do not be surprised, Hezbollah is an Israeli project as is the Assad Regime.
Thanks to GMA.

The stand-up comic with the almost-daily show peeks on us with more useless, meaningless and dumber ideas. And then you wonder why losers 3ala ashkaliha taka3.

Accusing Gagea of being a murderer has become an old CD that has been overplayed!!! Those who insist on playing the same old CD must pose and ask about the other lebanese so called leaders: Is Junblat a murderer? Is Berri a murderer? Is Aoun or Franjieh a murderer???? Whether we like Gagea or not, we have to respect his political views if we consider ourselves to live in a democratic society. Focus on the issues and not your own prejudices.

Bravo Beiruti, you are one of few people tthat understand that Hezbollah is an Israeli Zionist project to undermine Lebanon, of course blinded Mazen doesnt understand that , we would have to find thousands of spies in Hezbollah maybe o he can get that, i thought Hezbollah was so well organised that nobody could infiltrate it, isnt it what sayyed hassouni said? so the discovery of spies means 2 things according to what he said :

- theyve been here forever and are operating along with Hezbollah to undermine Lebanese sovereignty and independance , or that Hezbollah is finally not qualified to resist anything exept the lebanese state.

Dr. Criminal should hire a team of professional investigators to locate members of the now-defunct March 14 before attempting to contact any. Tip: try the bright investigators of the STL. I bet you they will tell you that they joined Hizballah, or the Syrian Regime or the Iranian Revolutionary guards, or... time will tell who else.