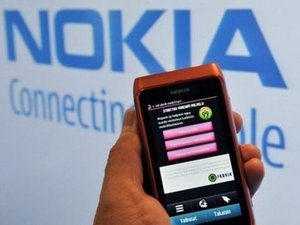 One of Asia’s biggest telecommunications fairs opens in Singapore on Tuesday with tablets and Smartphones taking center stage and Nokia making a fresh bid to attract a new generation of consumers.

As in past years, industry behemoth Apple which has a stranglehold on the tablet market will not be present at CommunicAsia -- instead it stages its own iconic events in California.

But Nokia will be back at CommunicAsia after a 10-year absence as the troubled Finnish giant looks to make a big splash at the annual expo.

It will be joined by Asian brands as well as BlackBerry maker Research in Motion (RIM) of Canada at the four-day trade fair.

Nokia's chief executive Stephen Elop will deliver a keynote address Tuesday in which he will provide an overview of the company's new strategy and an update on its partnership with U.S. software giant Microsoft.

Elop is also expected to speak on the importance of the regional market to Nokia, which accounted for at least eight out of every 10 phones sold in Asia in its heyday, according to CommunicAsia.

Nokia declined to say why the company decided to return to the expo after its last participation in 2000 but one analyst said the move showed how important the region is to the company's future.

In the intervening period, Nokia had held solo exhibitions outside the CommunicAsia venue in what was seen in the industry as a sign of supreme confidence in its brand.

But times have changed after Apple and other companies like Samsung eroded the Nokia hegemony.

While it remains the world leader, Nokia has seen its global market share of the high-end Smartphone sector dwindle.

"I think they have to be at CommunicAsia," said Marc Einstein, an industry manager for mobile and wireless communications with Frost and Sullivan consultancy.

"I think now with what is going on at Nokia, they really need a push to say they are still in the Smartphone race, the mobile phone race, so there is a need for them to be in full force," he told Agence France Presse.

San Francisco-based Zynga is the creator of massive hits such as FarmVille and Cafe World that have drawn millions of followers globally.

"So it's going to be very exciting," said Victor Wong, project director with the show organizer.

"Our efforts to move along with the industry is paying off," he told AFP.

A spokesman for RIM said the Canadian handset maker will be displaying its Playbook computer tablet and new BlackBerry Bold 9900 touchscreen smartphone at its booth.

Chinese telecom giant Huawei Technologies, which has been a part of CommunicAsia since 2000 and boasts the biggest exhibit space this year, will showcase its new Huawei MediaPad tablet that runs on Google's Android platform.

The Android platform is seen as the strongest challenger to Apple's iOS system.

According to Wong, the Chinese telecom participants take the show seriously and see it as a platform to expand their business in the region.

"They are a force everywhere. They are now very, very much more sophisticated and they really plan what they want to do," he said.